By: Sean Garrity Posted: October 31, 2017
Follow "The Hosting Blog" daily as hosting experts, programmers, and tech managers go in depth on a variety of tech-related topics.

TL;DR: Since 2002, HostUpon has operated with a mission to supply US- and Canadian-based site owners with the quality hosting they need to run their online businesses. We recently sat down with HostUpon CEO and Owner Alfez Velji, who told us how the company rose to success by delivering hands-on support, high uptime rates, and cutting-edge web services. HostUpon was a pioneer in the early FFmpeg and cloud hosting spaces, and continues to build customer trust and innovate with high-end hosting solutions and a forward-facing product development philosophy.

It’s safe to say that most modern web surfers have encountered FFmpeg during their journeys online. Though the name may sound technical, FFmpeg is simply open-source software that helps websites handle large multimedia files by encoding them into a format suitable for viewing in a browser. Because the software’s codec libraries are compatible with numerous file formats, it has become the go-to for the popular video-hosting sites, such as YouTube and Vimeo, with which we’re all familiar.

Anticipating the impact FFmpeg would have on the web, Alfez Velji perfectly timed the launch of his company HostUpon.

“I’ve been in the hosting industry since 2002. When we first started, our niche was FFmpeg hosting,” Alfez said. “We were trying to tailor to customers with multimedia websites, and that really took off.”

Founder Alfez Velji told us HostUpon began as an FFmpeg host but quickly grew its services and customer base.

Today, with the size and scale of multimedia sites on a curve of seemingly exponential growth, HostUpon still offers packages for FFmpeg customers. But the company’s hosting products have expanded to suit just about any client type — from startups to enterprise-level organizations.

HostUpon boasts 100% in-house infrastructure and support. And, with a strong emphasis on customer engagement, the company is able to provide direct assistance to accompany its wide range of services — including high-end cloud, VPS, and dedicated server solutions.

Catering to the Local Market With 100% Canadian-Based Datacenters

Despite HostUpon’s initial landmark success, the hosting industry proved to be a highly competitive market. As more hosts adopted the multimedia strategy that worked so well for HostUpon, the company found it would have to deliver additional advantages to make its services attractive to customers.

Fortunately, HostUpon’s localized infrastructure proved to be a major selling point, as both Canadian and US customers realized how easily their servers could be directly managed by staff.

“One of the things we realized was that a lot of our competitors — who claimed to be Canadian — had their servers in the US,” Alfez said. “Ours are in Toronto, about five minutes away from our head office.” 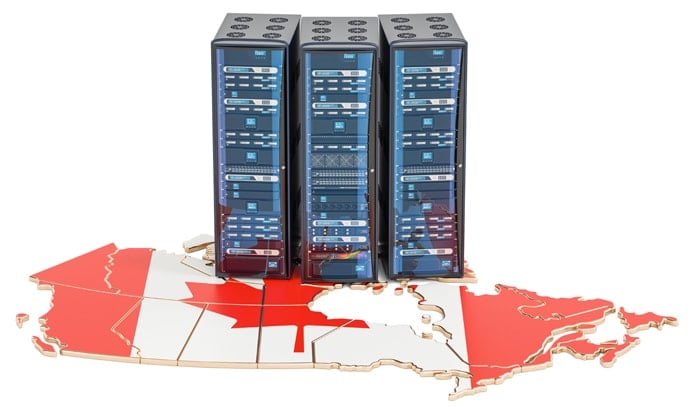 HostUpon’s datacenters are based in Canada, which provides speed and reliability for North American site owners.

Alfez told us that, while Canadian pride plays a role in HostUpon’s domination of the local market, the popularity of HostUpon among customers outside of Canada has been a huge factor in its continued success.

“I found that to be one of the biggest selling points for us — having our datacenters close to us, and having our servers on Canadian soil,” he said. “About 75% of our customer base is outside Canada, but a lot of them want to host in here.”

Privacy concerns over US laws have pushed several webmasters to look to Canadian or offshore hosting, as their websites are subject to the jurisdiction in which they are hosted.

In addition to increased privacy, Canadian hosting is in demand among local and other markets for its advanced telecommunications infrastructure and the close proximity of major cities where datacenters are hosted. Toronto and Vancouver (where HostUpon’s datacenters and offices are located) are close to the US border and act as hubs that allow high speed and reliability.

US-based servers located in San Francisco and Houston are susceptible to natural disasters with the potential to create power and service outages. Canadian-based infrastructure, conversely, can be located further away from high-risk coastal areas and fault lines.

One of the biggest advantages offered by HostUpon’s localized infrastructure is the ability for staff to be directly involved in server management. Direct access to servers makes it easier for HostUpon staff to be transparent with clients and more accurately assess troubleshooting tickets.

Any technical issue can more easily be pinpointed to a software malfunction or faulty hardware component, and a quick swap, reboot, or reinstall means minimal — if any — downtime. Additionally, in foregoing outsourced tech support, both HostUpon and its customers save money.

“Providing in-house support cuts down on phone conversations, ticket support, and live chat,” Alfez said. “We can actually answer the question in one or two replies — unlike the five or six common with outsourcing.”

With the transparency and accessibility that many large hosts lack, HostUpon can quickly build a trusting partnership with its clients. Alfez told us the response from customers has been very positive. He said the in-house support gives them peace of mind that their issues will be solved without having to negotiate long phone trees or wait for ticket responses.

“We don’t outsource any of it,” Alfez said. “Whether you call in, go online to chat, or submit a ticket, you’re always speaking with someone who works in our head office in Toronto.”

Alfez believes this personal approach to customer support is HostUpon’s biggest selling point and cites it as the primary reason he founded the company.

“You’re never going to get a predefined reply,” he said.

Aside from tailored support, HostUpon has had to distinguish itself from the competition by adopting new technologies that make for better reliability, security, and performance. Considering its origin as a tech-savvy multimedia host, HostUpon’s venture into virtual and cloud services has been a natural transition in its decade-long journey.

“One of the biggest game changers for us was the introduction of CloudLinux,” Alfez said. “Previously, it only took one customer to abuse and take down the whole server. Cloud Linux has allowed us to separate customers into their own virtual environments.”

Another major change came about with the implementation of VMware in HostUpon’s virtual private servers. The company’s original VPS offerings ran on OpenVZ, a container-based virtualization platform for Linux.

“We found that VMware made a big difference, despite the cost,” Alfez said. “The performance and the ability to manage our VPS platform has become an amazing experience for us.”

While OpenVZ is a fast and cheap open-source solution, it lacks the ability for users to modify the kernel or run non-Linux operating systems on the VPS. Conversely, VMware is universally compatible and contains a hypervisor that ensures performance as close to a physical environment as possible.

A Renewed Focus on Dedicated Servers and One-Click Installs

In addition to providing shared hosting accounts and virtual private servers powered by CloudLinux and VMware, HostUpon offers hosting for WordPress blogs, multimedia repositories and websites, and resellers. Although shared hosting — especially with the use of virtualization — is a cheap and easy way to get started in building one’s web presence, Alfez told us most of HostUpon’s customers eventually scale and upgrade to dedicated hosting.

“You can imagine when these people host thousands and thousands of videos, that shared hosting just isn’t going to cut it,” he said. “So a lot of our dedicated server customers are actually older customers looking to upgrade.”

Ultimately, HostUpon’s software and hardware innovations are implemented to benefit its loyal customer base. To make operations even easier for clients, HostUpon plans on adding more one-click install options, as well as improving on existing ones.

“In terms of the future, we’re really going to be focusing on the dedicated server market and the one-click installer,” Alfez said. “We’re trying to design a platform where you sign up for hosting and everything is already set up with a firewall, plugins, and a theme repository.”

Born to address the need for powerful and sizable servers, HostUpon is no stranger to innovation. In addition to its high-end hardware, powerful software, and a wide array of services, HostUpon is distinguished for its in-house support, which is trusted by more than 10,000 webmasters.

“To me, it always comes down to support. You can find the same hardware and pricing in other providers,” Alfez said. “But are you going to be able to call those providers at 2:00 am to walk you through restarting your server step-by-step? Our customers can.”