Disclosure: When you purchase through links on our site, we may earn a referral fee from our partners. For more, see our
ad disclosure and review policy.

TL; DR: Drawing on its extensive background in hosting and web development, the team at BoldGrid identified and solved the need to optimize web building and site design in WordPress. The company’s platform, a website builder that sits on top of WordPress, turns site creation into an intuitive experience for both novices and professional developers. The platform makes going live with sites quick and easy — effectively increasing utilization and retention rates for hosts. The integrated marketplace, numerous customizable features, and ease of use make BoldGrid an all-in-one solution for users at any experience level.

Years ago, a group of friends and I were talking about what constitutes the best hamburger. “Burger to bun ratio,” one said. “That’s important,” another chimed in, “but the main thing is that it has to eat like a totality. The whole must be greater than the sum of its parts.”

This was important work we were doing, and we felt we needed a vehicle, a website, by which to convey our philosophical lines of inquiry to the masses. That’s when our burger club was born, and that’s when we realized that none of us knew very much about web design.

Tasked with building our site, I began navigating through WordPress. It was daunting, and I soon found myself in the self-help section of a local bookstore searching for WordPress for Dummies.

I eventually got the site up, and it turned out pretty good considering my lack of experience back then. Still, I could have saved a ton of time researching and toggling if some of the tools around today had been available. A website builder like BoldGrid that integrates user-friendly tools, such as fine-tuned color palettes and industry-leading drag-and-drop capabilities, over the WordPress environment would have made the process painless. BoldGrid would have allowed me to customize my page with ease, eliminated the need to seek out plugins, and given us the ability to start talking hamburger a lot faster.

An Approachable & Streamlined WordPress for the Novice & Professional

BoldGrid was spawned by market demand to simplify WordPress for beginners and streamline it for developers. It functions by working on top of WordPress, making site building intuitive in an environment notorious for its difficulty.

“We found that many people who were installing WordPress weren’t actually able to get a site up efficiently, which was leading to high turnover rates,” said Mike Zyvoloski, BoldGrid’s Business Development Lead. “As a host, it costs a lot of money to onboard a new customer, and that customer is not cash flow positive for at least two years. So, it’s expensive when WordPress is supposed to be really easy.”

Free, customizable WordPress themes for BoldGrid make it easy to get your site up and running immediately.

Mike told us that people were running into problems with WordPress. After picking a theme, users were finding that it might not be compatible with a plugin or code they were running, and this led to a lot of time-consuming troubleshooting. “Once in WordPress, people found they had to use shortcode as a solution to some of the problems,” he said. “So, if you want to use columns, for example, you have to do the one-third, two-thirds shortcode, which gets really confusing.”

Mike’s team found that users also had to go elsewhere to find different plugins when building their sites. Users were having difficulty making themes look like what they were promised after purchasing them. This then required them to install demo content as a fix, which also meant spending a week trying to get the demo content out.

Once BoldGrid was built, it immediately addressed utilization and retention rates, almost overnight. As a result, BoldGrid’s name started taking off as an easy way to get WordPress sites live, causing conversion rates to skyrocket.

“We were looking for compatibility and ease,” Mike said, “so people didn’t have to piece together these zombie WordPress sites with all of these different plugins that might not even work.”

BoldGrid’s easy-to-use builder walks users through the design process, making site building feel natural to anyone, no matter the experience level. Designers, sysadmins, agencies, and DIYers can use the company’s solutions to build stunning websites easily and effectively. But professional developers also benefit greatly from the tool.

Users choose the colors they want, and BoldGrid fine tunes palettes to match.

“One of our key target markets are the developers,” Mike said. “Many were turning down $200- to $300-sites because the time it takes to build them wasn’t justified.” Because BoldGrid allows developers to get some of these sites up within an hour, they are now able to take on some of these smaller jobs and increase their portfolios and profit margins.

“Since launching, a couple of our developers have really taken advantage of this. One has over 250 sites that he’s done in BoldGrid, and the other has just around 180,” Mike said. “Because BoldGrid has been able to optimize their workloads, they’re not turning away this easy work.”

BoldGrid began as the brainchild of Todd Robinson, who is acting President for both BoldGrid and InMotion Hosting, the hosting company from which BoldGrid spun off. Though BoldGrid is now a standalone company, the experience of their founding team and former affiliation with InMotion is what initially separated them from the pack.

“Because of InMotion hosting, we had a lot of tools available to us right away,” Mike said. “We have a very seasoned dev team that came over from InMotion, and a client base that we were able to test the product with.”

The BoldGrid team didn’t have to go out hunting for users to try the product. They were immediately able to put the tool in users’ hands and receive feedback. This allowed BoldGrid to quickly remedy problems and inefficiencies within the tool.

The team also benefitted from input from influencers in the WordPress community. “They were seeing demos a year and a half ago, and were helping us make sure we were doing things in a WordPress way,” Mike said. “Most of it has been, ‘Hey, this is awesome!’ and just freely offering feedback to us.” 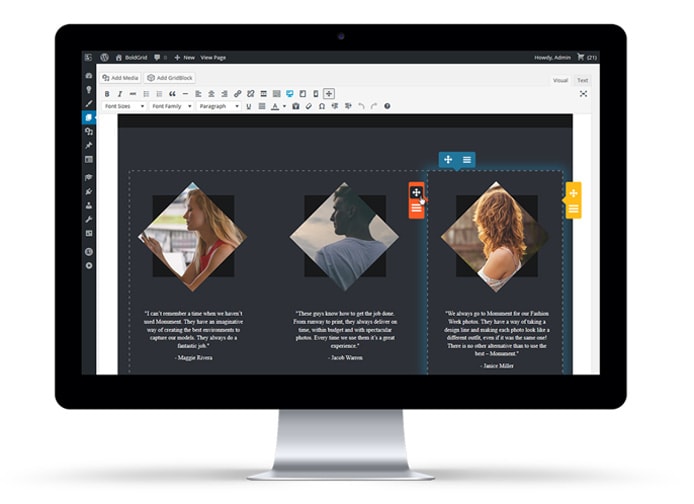 Plugins and features are all available within BoldGrid’s integrated marketplace, so users never have to leave the tool.

BoldGrid currently has a team of 13 developers, with plans to add more soon. With a product manager, project manager, and those on the business development side, the company has roughly 25 people working exclusively on the tool.

There are so many web builders out there, but few seem to be as flexible and offer as many customizable options as those provided by BoldGrid. The company’s all-inclusive approach to the web building process allows users to connect to the tools they need to build a beautiful site:

What makes BoldGrid so great is that all of its features are integrated into the tool itself. “We connect to APIs for color palettes, stock photography, and plugins,” Mike said. “The beauty is that you don’t have to approach outside vendors to pay them. There is a microtransaction currency called Coins that you can purchase inside of BoldGrid. So, you can purchase that stock photography right inside the tool.” 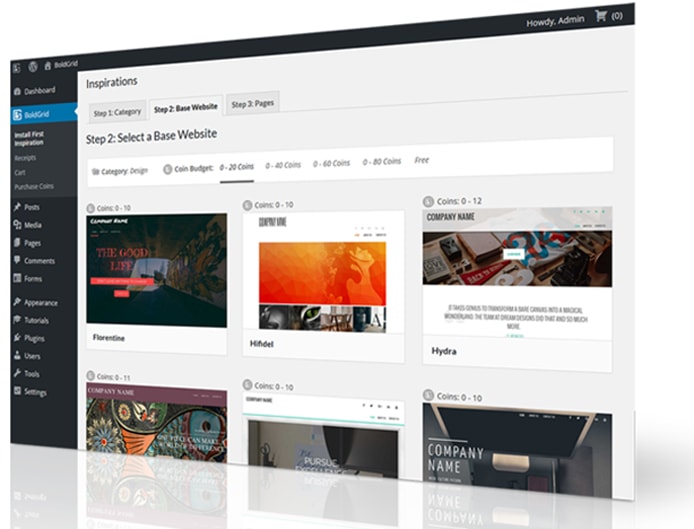 Once a stock photo is chosen, there’s no need to spend time on resizing or worrying about aspect ratio. Colors can be chosen by a user, and BoldGrid will redesign the entire color palette around them. “Everything is right in there and works seamlessly,” Mike said. For those who like a visual representation of how BoldGrid works, there is a very informative video outlining the tool on BoldGrid’s site.

Coming Soon: Upgrades and Extras for Hosts and Users

On the horizon for BoldGrid are premium features that will benefit hosts and developers alike, and a big part of that relates to optimizing revenue shares for everyone. “We want to make sure everyone is is fairly compensated for what they’re doing,” Mike said. “If they’re pushing out or promoting sales inside the marketplace, we want to make sure that there’s a revenue share in place. We also have to ensure the revenue is provided to the plugin provider.”

For hosts, BoldGrid plans on adding admin panels that allow hosts to view how many users on the server are using BoldGrid. “You can see who’s not on premium, so you’ll be able to market to them to upgrade them to a premium key as opposed to a free key, which is readily available right now on our website,” Mike said. “Hosts will have access to backend features that will make reporting much easier.”

Mike also notes that more premium features will be coming soon, including snapshots and rollbacks. This will allow seamless upgrades, prevent any conversion issues, and ensure that features are compatible after updates.

It’s been years since the launch of our burger club’s WordPress site. We’re still talking about hamburgers, and sometimes disagree on whether a grilled patty is superior to a griddled one. One thing we do agree on, however, is that all of the individual components of the burger need to work together to seamlessly create the whole. BoldGrid has accomplished this for web design. There’s no need to go anywhere else. Site building using BoldGrid ensures that you’ll get exactly what you want: a beautiful, effective site.