Backblaze Brings Clarity to the Cloud as Low-Cost, High-Performance B2 Cloud Storage Keeps Customers in the Know

By: Jennifer Young Posted: March 26, 2018
Follow "The Hosting Blog" daily as hosting experts, programmers, and tech managers go in depth on a variety of tech-related topics.

TL;DR: By moving from personal backups to enterprise-grade cloud storage, Backblaze has risen in the ranks to become a hefty competitor with tech giants like Amazon Web Services, Microsoft Azure, and Google Cloud Storage. The company, which offers backup and storage solutions at a low and transparent cost, has a unique innovation and strategy supported by the cutting-edge technology of its Storage Pod server and the company’s willingness to take educated risks.

As with many startups, Backblaze started by providing a solution to a real-life need. One day in 2007, Brian Wilson received a panicked call from a friend with a crashed computer on her hands. When Brian, who had faithfully backed up his data for years, asked for her backup, she had one question for him: “What’s a backup?”

Flabbergasted, Brian began asking people about their backup habits — and discovered that most people didn’t have any. He and four friends set about to change that, founding Backblaze as an easy-to-use backup system for both home PC and business users.

Setting the company apart from an industry of giants was tricky in the beginning, but it came down to making data backup and storage simple and affordable. Through a one-of-a-kind business strategy and revolutionary technology, Backblaze is able to offer its customers data backup for $5 per month or $50 per year — the same price since 2007. The company’s B2 Cloud Storage service is just as affordable at $.0005 per GB of storage and only $.01/GB to download data.

Now, with more than 500 petabytes of stored data and 29 billion recovered files, Backblaze has scaled out its model to be competitive with the likes of Amazon S3 and Microsoft Azure. According to Vice President of Marketing Ahin Thomas, the company has managed to bring some style to an essential and high-demand industry that’s not exactly glamorous.

“Being in the backup business, it’s kind of like being a plumber,” he said. “It’s not very sexy, but we all need it. Being data custodians is a very serious thing. We don’t mess around with that.”

After some market research, the Backblaze co-founders discovered a good price point for data backups came to $5 per month — they just didn’t know how to pull that off and turn a profit.

“The problem was there were no storage solutions where $5 per month would cover the cost, let alone let you run a business,” Ahin said. “We said, ‘OK, we should just go make a new storage system.’” 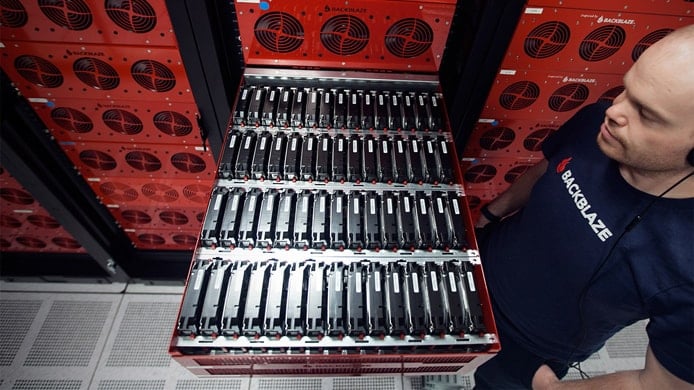 The latest version of Backblaze’s proprietary Storage Pod system fits up to 60 drives in a 4U chassis.

The company spent several years developing a patented storage infrastructure to meet those market demands and, in 2009, it deployed the Storage Pod server that made it possible to store more data for less money. Now, everyone from weekend hobbyists to large organizations, including the NASA Jet Propulsion Laboratory, have adopted the open-source system.

After several iterations of the Storage Pod technology, Backblaze continues to reduce the cost of storing data on the company’s machines while enhancing their power and capacity. Storing data with Backblaze costs 25% as much as it does with Amazon S3, Ahin said. Recently, the company significantly reduced the cost of downloading data.

The Not-So-Secret Recipe Behind Backblaze’s Success

A great deal of innovation went into making Backblaze the profit-turning company it is today, Ahin said. What many people might not know — but the company will openly share — is that Backblaze’s path to prosperity came by doing something other cloud storage companies refused to try.

“At Backblaze, we made a decision that no one else in the industry has made, and we made the decision 10 years ago,” he said. “The reason why Backblaze is so affordable is that we use consumer hard drives.” 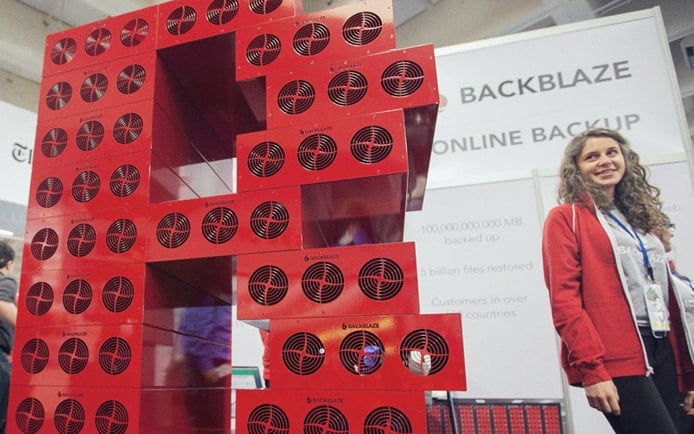 Most competitors use enterprise-class hard drives, Ahin explained, which are generally considered more reliable. Even though that was the prevailing mindset in the industry, it hadn’t been fully tested.

“All hard drives will fail,” he said. “That is just a fact. The going assumption in the industry is that you’ve got to use the thing with the enterprise label because they’re not going to fail as often. Our thought was, ‘We don’t know that to be true. If the enterprise drive is 10 times more expensive but only fails half as often, you’re better off just buying three consumer hard drives. You’ll save money.”

Years after making that decision, Backblaze tested the theory with extensive research — and, it turned out, the founders were right.

“Ten years and 100,000 hard drives later, we actually publish all of our hard drive failure rates,” Ahin said. “This is publicly available data from the last five years. We believe we’re the largest source of hard drive failure rates on the planet. Now we have data-based evidence the historical performance of enterprise drives does not yet justify their cost.”

Cutting out the Fat: Usability and a No-Nonsense Pricing Model

In addition to saving customers money, Backblaze doesn’t complicate the signup or onboarding process. Everyone pays the same price for cloud storage and backup, and they can get started right away, Ahin said.

“Go to our website, click ‘get started,’ and you can literally be uploading data in seconds,” he said. “There’s no, ‘Hey, let me qualify you and decide which salesperson is going to handle your account,’ and then all of a sudden I’ll tell you the price.”

Some service providers have different tiers or minimums that must be met to access certain features. Because all customers are paying the same price, Backblaze opens all of the platform’s functionality to all customers in an uncomplicated way.

“Between products that work, documentation that’s clear, and live chat support seven days a week from people that are coherent and can get you actual answers, it works,” Ahin said.

Plugins and integrations with major providers of other software tools — everything from WordPress for website building to Cloudflare for content delivery — help clients get easy access to their data and the platform.

“We’ve been proactive about sourcing the top three industry leaders for different solutions or use cases,” Ahin said. “You can keep all your files and data in B2, know that it’s backed up in the cloud, and never have to worry about running out of storage space.”

Transparency as Way of Life (and a Marketing Tool to Boot)

As Ahin told us, Backblaze recognizes the importance of protecting customer data, whether for mission-critical business applications or personal backups. The company prioritizes open communication and regularly publishes information about costs, technology improvements, status reports, and other metrics.

“At the end of the day, you’ve given us your data,” he said. “You need to be able to trust us. We don’t take our jobs lightly, and we have a culture of transparency.”

Backblaze not only wants customers to know them, the company also strives to get to know its customers. After all, understanding who its customers are has helped Backblaze develop a streamlined and easy-to-use product.

“We understand our role in the customer’s workflow,” Ahin said. “Unless you’re a total nerd, you’re not thinking about storage first. That’s where we come in and just make things work. We have a lower cost of storage, we pass that on to the customer, and 10 years later it’s all looking pretty good.”