By: Laura Bernheim Posted: May 24, 2017
Follow "The Hosting Blog" daily as hosting experts, programmers, and tech managers go in depth on a variety of tech-related topics.
Email

TL; DR: Designers and developers needing a lightweight, efficient, and affordable tool for basic image manipulation and editing can quickly get overwhelmed by Photoshop’s intricate features and hefty price tag. XnView, however, is a free resource for reading, viewing, and processing more than 500 different image formats. Founder Pierre-Emmanuel Gougelet created more than a dozen programs for desktop and mobile devices to help users effectively organize, edit, and convert images — and he still stalks the product forums to offer support and listen to bug reports and feature requests.

Web development and design are all about efficiency — lightweight code, powerful servers, and automated infrastructure. Businesses and individual developers maximize profits by stripping out unnecessary processes and expenses and optimizing workflows.

That’s where XnView comes in. The collection of free software programs cultivate a streamlined, user-friendly space to view, edit, and organize images.

Released in 1998, XnView provides a reliable and efficient tool without the extraneous features — and lofty price tag — of alternatives such as Adobe Photoshop. Designers and developers can quickly find, crop, resize, and tone images that boost a website’s visual impact without getting bogged down.

XnView Founder Pierre-Emmanuel Gougelet, a developer, started playing around with code on an Atari computer in the mid-1990s, seeking a simple and flexible image viewer and converter. The few programs that existed at the time only supported a handful of file formats.

With a focus on usability and adaptability, Pierre publicly launched XnView a few years later and made the program free for private, educational, and nonprofit users. Commercial users are asked to purchase a license, which costs less than $30.

The original program, written in C, can read more than 500 file formats and save to more than 150 extensions. The comfortable and easy-to-use interface operates similarly to Windows Explorer when users are browsing and navigating through folders and files. 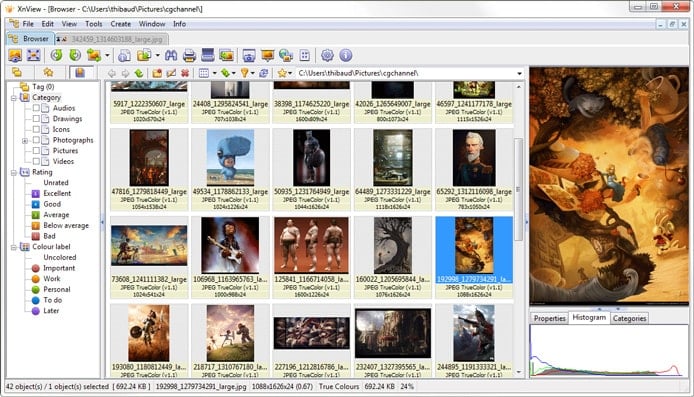 Since 1998, XnView has provided a user-friendly way to organize, edit, and share photos.

The image editor offers all the standard, frequently used processes, including adjustments for brightness, contrast, color palette, and size. Automated tools, such as red-eye correction and the batch processor, simplify tedious corrections, while power users can extend XnView with Photoshop plugins to introduce the more heavy-duty features.

“I try to keep XnView as simple as possible with so many features,” Pierre said.

Pierre rewrote the XnView code to introduce support for multiple operating systems. Now available for 32- and 64-bit versions of Windows, macOS, and Linux, XnView MP (the MP stands for multi-platform) includes improved versions of features and a batch conversion module.

In addition to a redesigned interface and Unicode support, XnView MP debuted in 2013 with speed-optimized loading, improved caching, and multi-core processing to boost performance.

XnView MP also introduced several new features, such as the ability to view and upload albums in Picasa and Flickr. The web capture tool enables users to take a screenshot of sites without using a web browser, and the revamped software included a spotlight editing feature to highlight particular elements of an image. 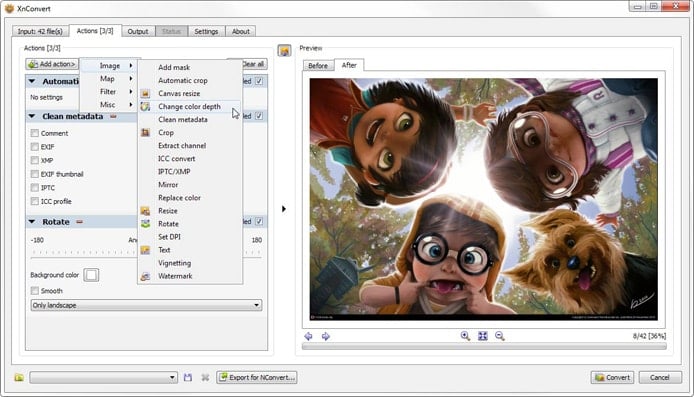 Pierre has also repackaged XnView features in an array of mobile apps, enabling users to add filters and effects, create GIFs, and share images to social media or email from phones and tablets. The apps include:

The apps range from specific functions, such as adding vintage or cartoon effects, to more comprehensive tools that create a photo booth strip, introduce a new camera interface, or convert images to mosaics.

In addition to the standalone software programs, developers can download and use NConvert, a batch image processor similar to XnConvert housed within a command line utility instead of a graphical user interface.

More than 80 commands will help users tweak and resave images simply by typing a line of text. Additionally, developers can write scripts, save them as text files, and have NConvert run the script to perform multiple processes on multiple sets of files.

To avoid the coding or to test the desired edits before processing images, users can view the changes in XnView or XnView MP and export the automated conversion script for NConvert.

As if coding, updating, and maintaining more than 15 programs weren’t enough, Pierre regularly posts on XnView product forums. Each page of the XnView website encourages visitors and users to send bug reports or feature requests directly to Pierre.

XnView users can receive support and suggest new features on the forums, where Pierre frequently posts.

“I always enhance XnView after users’ requests,” he said. “XnView is always in development.”

Most products have separate forums for support, suggestions, issue tracking, and general announcements or questions. More than 15,000 registered members have written more than 124,000 posts on nearly 24,000 threads — Pierre alone counts for more than 27,000 posts.

“I would like to offer the best images to users on desktop and mobile,” he said. “There’s no need to start a big app like Photoshop to convert files or make a slideshow. The tools are meant to help all users of picture files.”