TL; DR: Whether you’re a seasoned pro or a beginning web entrepreneur, finding a host you can trust with powering your online presence is nothing to take lightly. That’s where experts like Jerry Low come in. Jerry’s site, WebHostingSecretRevealed (WHSR) was built to give site owners the tools they need to compare features, pricing, and the pros and cons of hosting packages so they can choose the solution best-suited for their individual business missions. We recently caught up with Jerry, who told us how he and the WHSR team have been committed to helping site owners build their brands online for the past 10 years.

Malaysia has long been known as Southeast Asia’s cultural hub. Situated in the western arm of the South China Sea, the country is home to and welcomes people from an array of countries, including India, China, Thailand, Vietnam, and Indonesia, among many others.

This diversity has led to a famous culinary scene with international influence and acclaim. Malaysia has also attracted the best and brightest from around the world to participate in its thriving tech sector. And, as a web industry professional and self-proclaimed foodie, Jerry Low is happy to call the country home.

After graduating college with a degree in mechanical engineering in the early 2000s, Jerry became interested in web technology and development. By mid-decade, he was managing more than 30 websites and quickly realized there was much to be desired in the web hosting space.

“The market was quite different then,” he said. “Most small- and medium-sized hosting companies were bootstrapped and led by their founders. And there were a lot of smaller hosting brands from which site owners could choose.”

Jerry told us there wasn’t really a standard price reference for hosting services at the time. Most companies marketed an array of similar service, but they were all priced differently. So Jerry rolled up his sleeves and decided to make things a bit easier on business owners and entrepreneurs looking for hosting and launched WebHostingSecretRevealed (WHSR).

“I started WHSR in 2008 as a side project to share my experiences dealing with a number of different hosting companies,” Jerry said. “In 2008, many people I knew were still new to the term blogging and internet marketing. And I knew there was huge potential in hosting services made for the masses.”

The Hosting Scene’s Changed, But the Importance of Reliability Hasn’t

Jerry has witnessed a number of shifts in the hosting market over the past decade. And one of the biggest changes has been the gradual chipping away at the barriers to entry into online markets for the small business community.

“It’s very easy to create and own a website today compared to 10 years ago,” he said. “Hosting and domain costs are twice as cheap today.”

Jerry told us website builders and content management systems (CMS), such as WordPress, Joomla, and Ghost, have contributed greatly to helping businesses ease the process of building online presence. However, although more businesses are now able to get up and running online without a full-fledged development and IT staff, Jerry noted that staying online and available to visitors should be the #1 priority when selecting a hosting provider.

“Server reliability is the biggest factor to consider, and uptime rates below 99% are unacceptable,” he said. “Nothing is more important than having a web host operating 24/7. Visitors may come to your site from all over the world. As a result, you need a web host that is stable both in terms of its servers and its network connections so visitors (and potential clients) can access your site around the clock.”

Dishing Out Unbiased, First-Hand Reviews Based on Hard Data

But it doesn’t end at reliability. Jerry told us there are a range of items to consider when choosing a host.

“There are so many factors that come into play when selecting the right hosting solution,” he said. “That’s why it’s important to turn to an A-to-Z hosting guide to find the host and package right for your business mission.

Jerry takes pride in the fact that WHSR’s hosting reviews are fair and unbiased. The reviews are based on careful testing by Jerry and his editors, taking into consideration pricing, feature sets, support, and reliability.

“We only publish reviews on hosting services we’ve used before,” Jerry said.

The review process usually begins with Jerry and his team setting up a test site with a host. Then, they use third-party testing and QA services, such as WebpageTest.org, Bitcatcha, and Uptime Robot, for a month before penning the review. This period gives the team an accurate picture of what the host’s customers are experiencing.

This, Jerry noted, allows the team to construct reviews based on “cold, hard data” instead of bringing in personal preferences and biases.

A Diverse Team Collaborating for the Benefit of Site Owners Everywhere

Though Jerry started WHSR on his own, remaining a one-man show was impossible after the site’s popularity took off. WHSR welcomes visitors from around the world seeking hosting solutions, and, as a result, Jerry had to expand his team.

“Team WHSR consists of nine members from four different countries,” he said. “Everyone works remotely, but we still all collaborate seamlessly.” 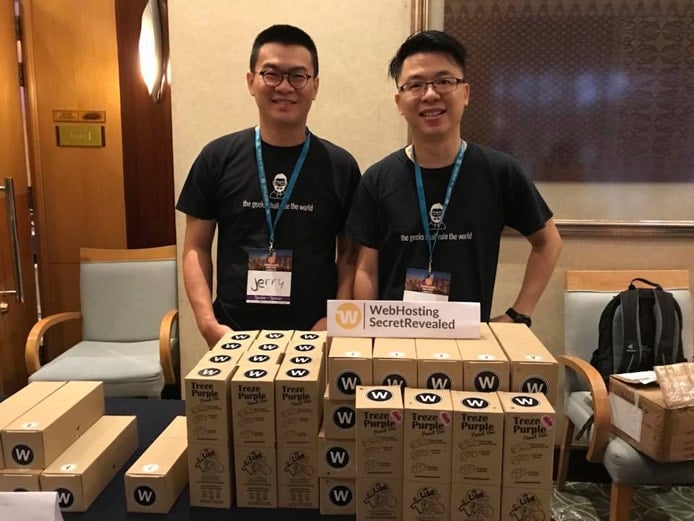 Jerry and Site Manager Jason Chow man the booth at a local WordCamp show in Kuala Lumpur, Malaysia, in 2017.

Jerry said the key is working in small units on each project. When there’s a hosting review to tackle, no more than three team members connect to test and research the services. And, as Jerry noted, having the right people on the case has been integral to WHSR’s success.

“It was extremely difficult finding the right team members who were disciplined and self-motivated,” he said. “But, now that I have them in place, I spend a minimal amount of energy on management tasks. And everyone has the freedom to choose where and when they want to work most of the time.”

Up Next for Jerry and Co. — New Tools to Help Site Owners Improve UX

Overall, Jerry told us the biggest benefit WHSR delivers to site owners is time savings. The market is crowded with thousands of hosting providers, and all of them seem to market and price themselves the same. Jerry’s aim is to cut through that exterior messaging and get to the heart of the quality and value these hosts actually provide.

“Our data-oriented reviews help shoppers filter out the noise and select the host that’s right for their individual business missions online,” he said.

But Jerry’s not satisfied with stopping there. His latest plans for WHSR involve developing a new website auditing tool.

“This will allow users to identify site issues, such as slow loading speed and bad UX on mobile,” he said. “It’ll all be possible in just one scan. The key reason behind creating the tool is to continue our relationship with users after they’ve selected a web host and built their site.”