By: Christine Preusler Posted: November 1, 2017
Follow "The Hosting Blog" daily as hosting experts, programmers, and tech managers go in depth on a variety of tech-related topics.

In October 2014, the World Wide Web Consortium (W3C) published its official recommendation for HTML5, which transformed the online space and development processes through added functionality and increased efficiency. For uKit, a Russian-based company preparing to launch a browser-based website builder targeted to the small- and medium-sized business market, the timing couldn’t have been better.

“We started with HTML5 and CSS3 upfront,” said uKit Public Relations Manager Alexey “Alex” Korneev. “It was a great time for building such a project because of shifts in the tech landscape.”

The uKit Group, established in 2005 and made public in 2015, harnessed the latest technological trends to help business owners get online — regardless of their technical prowess. And this was met with fast success.

In its first year, uKit’s intuitive site builder and management system had gained the attention of roughly 300,000 customers. By its second year, that number had more than doubled to upward of 700,000 users worldwide.

Today, the uKit Group hosts 3.5 million sites across its platforms. Customers in more than 100 countries have built their online properties using uKit’s 350-plus professionally designed, customizable templates. The website builder can generate sites by pulling content from social media platforms, too. With continual improvements and an AI-based website builder on the horizon, uKit is making web development convenient and affordable for SMBs around the globe.

No Coding Required: Easily Create a Site Unique to Your Brand

The uKit site management system enables users to quickly create an industry-specific site through the use of adaptive, 100% mobile-friendly templates. Site owners can customize sites in a drag-and-drop environment using an array of themes that can be tailored to match a business’s brand.

The company’s professionally designed templates can be employed for a wide range of use cases, from websites focused on construction to cosmetology and everywhere in between. And, as Alex told us, there’s no need to have a background in website building or software development. In the rare case a user can’t find a design that fits his or her needs, uKit will develop a custom website based on individual specifications. 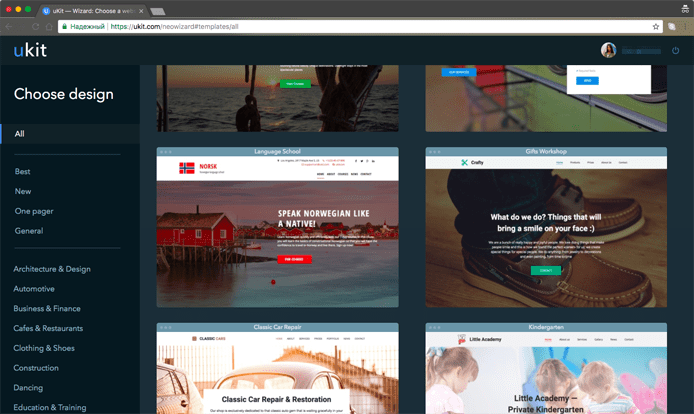 You don’t need to be a professional to design a stunning site; uKit’s themes and web builder do the work for you.

“This has attracted hundreds of thousands of customers to uKit,” Alex said. “We have users in Canada, the US, and throughout Europe and Asia.”

Another factor that’s drawing site owners to uKit in droves is price. The company boasts a number of budget-friendly plans with cost points tailored to the scope and size of a business.

The four subscription packages (Premium, Premium+, eCommerce, and Pro) all include uKit’s proprietary web builder and hosting as part of the cost of entry. Plans also come bundled with SEO tools for easy website promotion, optimization through Google Analytics, and fast technical support, making it possible for all entrepreneurs to effectively manage their sites.

Building an online presence begins somewhere other than on a website for some small businesses, according to Alex.

“Many people today start promoting themselves and their companies through social networks,” Alex said. “We saw this as an opportunity to help them create a more robust, professional appearance online through our web building tools.”

Alex told us uKit acts as a springboard for businesses to take the next logical step — the development of a dedicated website — in their online marketing strategies. 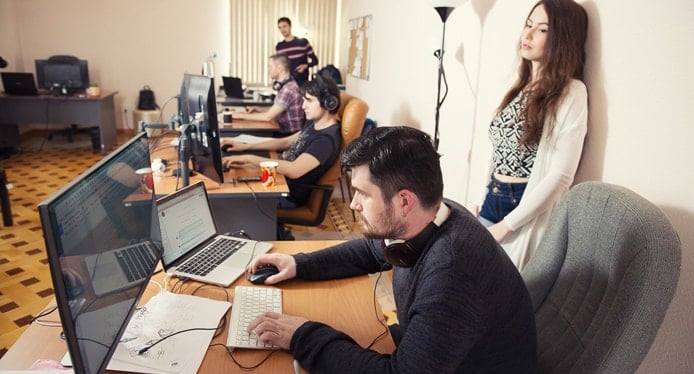 The uKit dev team devised an ingenious way for businesses to auto-generate sites by taking content from social media.

The company’s tool, uKit Alt, automatically pull content from profiles on Facebook — or VKontakte (VK), the equivalent platform for the Commonwealth of Independent States in eastern Europe — to create a site that perfectly complements their social media accounts.

Users can choose from a single-page website, ideal for promoting one product or service; or a multipage platform, intended for users with multiple products and frequent posts. Within minutes, the program transfers social network content into a fully customizable website template. All users have to do is make a few tweaks.

“Most people don’t want to create a website — they just want a website,” Alex said. “And this tool makes that possible in less than an hour.”

In many ways, uKit’s strongest point is its onward-and-upward mentality. From regular updates and extended features to the frequent release of new widgets, designs, and tools, the company is always looking for new ways to help SMBs create successful sites quickly and easily. Indeed, in its two years of existence, uKit has expanded its offerings by adding 42 functional updates and 96 new designs — many based on customer feedback.

For example, uKit recently announced an update allowing users to attach an SSL certificate to their sites, which impacts site rankings and is crucial for those selling products and services online. The certificate is free — all users need is a custom domain to activate the HTTPS protocol.

At uKit, the culture is all about innovating web solutions for businesses — with a bit of fun sprinkled in here and there.

And, in summer 2017, the company announced the launch of additional updates and features. The new Share Buttons widget was built to facilitate word-of-mouth marketing through its uSocial service. The point is to allow users to share a site’s content with their followers on social media.

The company also released its AmoCRM widget in response to customer demand. This integrates customer relationship management with site management so online businesses can conveniently follow up with leads and convert sales. All the new tools uKit releases are meant to help customers more easily manage their businesses, attract audiences, and produce the largest ROI, according to Alex.

Alex told us uKit is keeping a careful watch on the market to continually update its core website builder while also developing completely new solutions.

“One trend we see on the market right now is the use of artificial intelligence technologies — machine learning — in website building,” he said.

While AI isn’t yet capable of building a comprehensive website from scratch, it can be leveraged to redesign existing sites, infusing them with unique designs, responsive layouts, and SEO.

“We’re going to begin an experimental startup that is not going to build a website from scratch — with AI, the machine needs content — but the system will redesign websites,” Alex said.

Using just a link, uKit AI will analyze a site and create an upgraded version in as little as 10 minutes. The result may be modified by the user to ensure accuracy and allow for adjustments based on personal preference before being published on a custom domain. The company publicly announced plans for the project during an April 2017 AI Conference in Moscow, during which the uKit AI was given the Audience Choice designation for receiving the most positive feedback from attendees.

While the service hasn’t officially launched, customers can be among the first to test uKit AI’s beta version, which allows them to peek into the company’s future.

“We are standing close to the next revolution in this industry,” Alex said.