The Tor Project: An Unwavering, 14-Year Commitment to Protecting Civil Liberties and Providing Safe, Secure Access to an Uncensored Internet

By: Laura Bernheim Posted: February 13, 2017
Follow "The Hosting Blog" daily as hosting experts, programmers, and tech managers go in depth on a variety of tech-related topics.

The network of thousands of volunteer-run servers boosts online privacy and security, providing anonymous paths for Internet users to deliver and search for unlimited information.

The original project, run by computer scientists and mathematicians at the US Naval Research Laboratory in the early 2000s, provided the flavorsome inspiration for the network’s name and logo — Tor is short for The Onion Router.

Who Needs Online Anonymity and Why Millions of People Choose Tor

Given the privacy and security protections offered by Tor, people around the world access the network for a variety of reasons:

Beyond the specialized industries above, general Internet users can use Tor to protect their identity from thieves and advertisers, guard private data from irresponsible companies, safeguard children’s online activities, research sensitive topics, as well as avoid surveillance and censorship.

How Tor Works: Peeling Back the Layers of Onion Routing

Paul Syverson, Roger Dingledine, and Nick Mathewson launched the alpha version of Tor in 2002, with a public release happening a year later. The Naval Research Laboratory released the code for Tor under a free license, and the Electronic Frontier Foundation began funding the project. 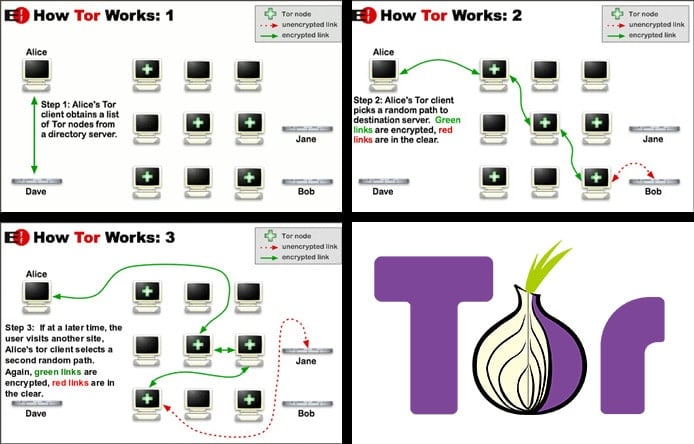 The Tor network anonymizes Internet traffic by routing it through random circuits of relay servers.

As the original name implies, Tor relies on onion routing, which nests layers of encryption across a wide network. Internet traffic, or data packets, have two parts: the payload, or information being sent, and the header, which displays source and destination locations, file sizes and types, along with other identifying information. Internet service providers and other surveillance programs can examine headers for revealing data.

The Tor network obscures header information by routing traffic through several detours across the Internet. Instead of going directly from the source to the destination, data on the Tor network take random paths through a handful of more than 7,000 available relays.

Each relay connection is encrypted a step at a time, meaning no relay ever knows the data packet’s full path. A user’s path through the Tor network changes every 10 minutes.

The non-profit Tor Project and an open community of developers maintain 14 software programs and services to secure users’ Internet experiences, ranging from mass-market products, like a web browser and chat client, to more technical software like a terminal status monitor and discrete-event network simulator.

The bullet-proof way to access the Tor network is through their browser and bundled programs. Based on an Extended Support Release (ESR) branch of Firefox, Tor Browser adjusts browser preferences and applies a series of patches to improve privacy and security.

Torbutton and Tor Launcher extensions further obscure a user’s online activity, while HTTPS-Everywhere, NoScript, and other plugins protect their privacy. Tor warns that almost any other web browser configuration will likely be unsafe to use with Tor.

Also based on something from the Mozilla community, Tor Messenger uses Instantbird to create a secure chat platform that supports a wide variety of communications, including XMPP, IRC, Twitter, Facebook, and others.

Tor Messenger is still in beta but sends all traffic through the Tor network with an excellent user interface, secure updater, along with automatically enabled Off-the-Record messaging. Future releases, which are expected to be paired with Mozilla’s ESR cycle, could include multi-party communication features, encrypted file transfers, and international versions.

Android users can access the web, instant messaging, and email through the Tor network by using Orbot, a free app created as part of a partnership with the Guardian Project. Orbot includes Tor and the libevent API, along with a local HTTP proxy and SOCKS4A/5 interface.

Orbot, a collaboration with the Guardian Project, brings the Tor network to Android devices.

Orbot can be used for any app with a proxy feature and can be configured to transparently proxy all of the device’s Internet traffic through Tor.

Nicknamed the amnesic incognito live system, Tails is an operating system that boots from a USB drive, DVD, or SD card. Because it is confined to removable media, Tails leaves no evidence of its usage on whatever computer on which it runs.

Tails comes with several built-in applications, including a web browser, instant messaging program, email client, image and audio editor, and a productivity suite, all pre-configured for Tor security and privacy.

How You Can Contribute and Get Involved With the Tor Project

The Tor Project relies on volunteers to support and develop software, along with maintaining and growing the network.

Volunteers with at least 2Mbps for upload and download can configure their Tor to donate bandwidth and become a network relay — the more relays, the faster the Tor network. Tor users can also test complementary programs, contribute documentation, and translate documentation — particularly into Arabic or Farsi — for users living in censored-Internet areas.