TL; DR: With an eye for great design and a passion for ongoing innovation, ThemeFuse has been helping clients produce stunning WordPress pages since 2009. Today, the company is changing the game with the introduction of Brizy — a simple yet powerful WordPress plugin that allows users to build sites by stacking “blocks” of premade, customizable content. We recently caught up with ThemeFuse Co-Founder Dimi Baitanciuc, who gave us the scoop on the company’s new website builder, as well as plans for expanded features in the near future.

When it comes to websites, first impressions are everything. A sleek design can encourage users to engage with content in the same way a cluttered one will immediately drive them away. In fact, studies have shown that visitors typically judge the aesthetic appeal of a website within just 50 milliseconds.

As a provider of some of the most eye-catching WordPress themes in the industry, ThemeFuse understands this concept well. The company was formed in 2009 by Sergiu Bagrin, Dimi Baitanciuc, Bogdan Condurache, and Alex Luncasu — a group of web designers and programmers looking to create high-quality WordPress themes that would help customers stand out online.

“Back in 2009 in the WordPress space, in terms of templates, we didn’t necessarily like what was on the market,” ThemeFuse Co-Founder Dimi Baitanciuc said. “Overall, the designs tended to look a bit template-ish with all the perfect pictures and the perfect smiles, and we wanted to bring something different to the table. Back then, and even now, one of the advantages we have had is a really strong design department.”

The market has progressed rapidly since ThemeFuse made its debut, and the company has stayed one step ahead the entire time. In 2014, for example, the group released Unyson, an open-source framework for building WordPress themes, complete with built-in extensions and extensive documentation and support.

“We built it to help us create themes faster and easier, but at the same time we wanted to give something back to the community, so we created it as open-source,” Dimi said.

The innovation has continued since then, culminating with the recent launch of Brizy, the company’s new, easy-to-use site builder for WordPress. The drag-and-drop tool is as powerful as it is simple — it’s compatible with any WordPress theme, offers endless design options, and requires zero coding chops. And, with plans for Brizy Pro in the works, it’s clear the company isn’t putting on the creative brakes anytime soon.

ThemeFuse is known for its vast selection of premium WordPress themes — many of which come free with a hosting plan from one of the company’s partners, including Bluehost, InMotion, and SiteGround. Instead of generic themes, ThemeFuse offers designs catered to individual industries, from sports and travel to health and beauty.

Many were built on ThemeFuse’s Unyson framework, a technology that has empowered the company to produce professional templates at a quicker rate.

ThemeFuse has been designing stunning, professional-grade WordPress themes since 2009.

“The process used to take three, four weeks maybe,” Dimi said. “Nowadays, the framework takes care of the structure, and you don’t have to have three or four people working on it — the designer can design everything visually.”

In addition to seemingly endless design options, ThemeFuse offers premium support through an extended knowledge base, video tutorials, and an AfterCare Help Desk available 24/7. Customers looking for more hands-on help can leverage the company’s custom work offering, which can include everything from WordPress and theme installation to site optimization and full site migration with security options.

In 2016, following the success of the Unyson, the ThemeFuse team began working on a visual solution for building and editing WordPress sites.

“We actually saw the writing on the wall two or three years back when all this visual building and creating content started,” Dimi said. “The idea was to make a tool — a website builder or page builder — that’s super easy to use.”

“Basically, Brizy is a page builder, and the focus here was to let users add things visually on the front end, just by clicking,” Dimi said. “When you click anything on the page, you can change it. All the options are laid out in such a way that everything is right there where you need it.”

The process is extremely intuitive thanks to “blocks” of premade, customizable content that users can stack in any order or fashion to build their site.

“For users who may be a bit intimidated to create everything from scratch, there are over 150 predesigned blocks made by us, so they can put the page together in a matter of minutes just by putting some blocks together.”

Dimi told us visual builders, such as Brizy, are ushering in a new era of web design.

“Creating content on the internet in a couple of years will not happen in the back end,” he said. “This is the future — we will visually create websites and content on the web in this manner.”

As a WordPress plugin, Brizy is free, and users can access it by searching the WordPress Plugin Directory. But the best way to get to know Brizy’s easy-to-use interface is through the company’s nifty browser-based demo at https://brizy.io.

“I encourage everyone to go try it out because, the fact is, it’s actually harder to explain in words what Brizy is than to actually do it,” Dimi said. “This is a good thing — we’re on the right track here if it’s harder to explain in words than to actually do it. You just click something, some options appear on the toolbar, and everything is right there in the interface. You don’t go in the different sidebars and try to figure things out.”

Current customers can rest assured that their accounts will be migrated seamlessly — Brizy is making the process, well, a breeze. 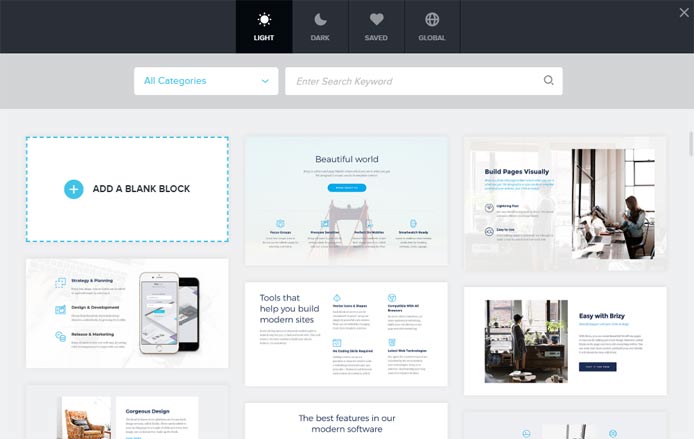 Brizy was built to be user-friendly, and the tool’s intuitive interface drives that point home as soon as the builder is opened.

“We’ve started to migrate the pages and create the themes and the pages again, on Brizy,” Dimi said. “We have around 50 themes, and we’ve already, in two weeks, migrated 23 or so. It goes pretty fast with Brizy to basically recreate all the pages for all our clients.”

In addition, licenses purchased through ThemeFuse will extend to Brizy.

“All our existing clients, because they paid for their licenses and memberships on ThemeFuse, they’ll get free access to this new upgrade on Brizy,” Dimi said.

Brizy currently operates under a freemium model in which access is free of charge, and additional features are available via an upgrade. That upgrade will come in the form of Brizy Pro, which is set to be released by the end of summer.

“We’re working on a professional version that will come with extended functionality for different elements and different features for marketers and the professionals, like a pop-up builder and integration with third parties like MailChimp, Campaign Monitor, and so on and so forth,” Dimi said.

Tiered packages will be available with various support options and terms, but pricing is forthcoming. In the meantime, the company is busy fine-tuning both the free and upgraded versions of the software.

“We have our hands full with this,” Dimi said. “We just launched it, and the features will continue to be our main focus.”