By: Sean Garrity Posted: January 5, 2018
Follow "The Hosting Blog" daily as hosting experts, programmers, and tech managers go in depth on a variety of tech-related topics.

TL; DR: In 2010, developer Ben Edwards was looking for a reliable vendor of test devices for his Android app builds. He quickly learned the existing online bid and exchange marketplaces were insufficient platforms on which to purchase the latest, fully functional mobile phones, so he devised his own solution with Swappa. Ben’s side project rapidly blossomed into what many now consider a go-to venue to find quality tech products and today hosts millions of secure, trustworthy transactions per month. We recently sat down with Ben, who told us how Swappa’s rise to success was due, in large part, to its people-powered engine that removes the middle man and allows users to buy and sell gadgets and the latest technology directly to one another.

Ben Edwards had always been interested in software development and entrepreneurship. While attending college, he launched his first startup, gaining the knowledge and experience he would apply to later ventures.

Taking a particular interest in mobile app development, Ben turned to several online marketplaces looking for suitable testing devices. However, he quickly found himself disappointed with the hassle these platforms presented, as well as the abundance of broken devices for sale. Ben needed an easier and more reliable way of obtaining a wide variety of test products, so he decided it was time to launch his very own marketplace, Swappa.

“Swappa came about as a way to scratch a personal itch,” Ben said. “Back in 2010, when Swappa officially launched, I was trying to get into app development for Android. In doing that, I needed to build up a cache of various devices.”

While sites like eBay and Craigslist are popular, their massive scale makes it difficult for staff to track down every instance of fraud. As a result, these sites are overrun with listings fraught with blacklisted phones, broken tablets, and poor seller communication.

“I knew there was a better solution, and Swappa was started as a side project to create a better marketplace for mobile devices,” Ben said.

Created specifically for the mobile exchange space, Swappa lets users directly buy and sell devices to other consumers. Listings are manually reviewed and approved to ensure that no junk devices slip through the cracks. At the same time, Swappa’s fees are nominal compared with those of its larger competitors, meaning more money in the pockets of sellers, as well as the assurance of quality products for buyers.

Competing With Giants Through Specialization and Support

When Swappa began in 2010, Ben centered a focus on Android users because they represented an enthusiastic community largely populated by developers.

“Our catalog has greatly expanded since then, and having that specialization allowed me to build the site out for people who had fallen in love with Android early,” he said.

By limiting its marketplace to a handful of devices and brands, Swappa is better able to provide support should a sale go wrong. This also means a significant reduction in the clutter prospective buyers will see on the site compared with what they encounter on local Craigslist pages or eBay’s electronics section.

Among Swappa’s other main differentiators are its simplicity and presence of the human element.

“First of all, Craiglist doesn’t really have support, and eBay’s support is insufficient,” Ben said. “That’s why I made it a priority from the very beginning that Swappa would have excellent human-powered support.”

While larger sites, such as eBay and Craigslist, use automated processes to identify junk listings based on keywords, Swappa employs real people to review each and every device listed for sale. In addition, buyers are much more informed because the bulk of their research is done for them ahead of time by Swappa staff.

In addition to creating one of the first people-powered markets specifically for mobile devices, Swappa makes it more affordable for users to upgrade to the latest in mobile technology. It does that by giving sellers a larger share than that offered by other marketplaces of the sale proceeds from their old devices. Conversely, buyers get a better value for their investment than they would purchasing the latest iPhone at full price from an Apple Store.

At the same time, users who are a bit behind the trend wave can also cheaply upgrade by using Swappa to find the next-to-latest iPhone or Android that suits their needs and their budgets. 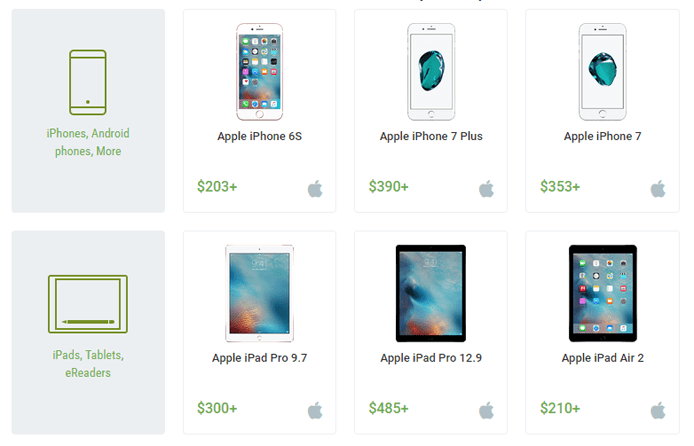 Swappa takes a smaller percentage of sales than most marketplaces, which allows sellers to list products at lower prices.

By bringing buyers and sellers together, Swappa actually helps prolong the lifecycle of these phones. The steady release of new phones and tablets means a higher turnover for these devices, which actually drives the secondary market. When sellers need money for their new phones, they can use Swappa to sell the phone to someone in need of a cheap upgrade.

“Our busiest time of year usually starts in September, when Apple releases its new iPhones,” Ben said. “For every person who wants the latest and greatest, there is another who wants to save a few bucks and get a gently used, fully functional device.”

Strict QC Keeps Junk Devices Out of the Marketplace

In an effort to keep Swappa’s marketplace clean, numerous quality control measures have been put in place. Unlike larger eCommerce sites, Swappa takes a more personal approach to bringing buyers and sellers together.

Considering the surprisingly high number of phone scams on platforms, such as eBay and Craigslist, Swappa takes care to ensure that all devices listed for sale have been manually proven to work, were legally obtained, and are structurally sound. To meet all of Swappa’s criteria — and satisfy buyer expectations — a device needs to be very gently used overall, with no outstanding financial obligations tied to the seller.

“Our moderation process is something that’s very unique to Swappa,” Ben said. “Basically, we have a higher standard for what we allow on the site, but we also actively investigate everything to enforce those policies.”

Among Swappa’s requirements are that a device has no cracked glass, moisture indicators, or non-functional buttons. In addition, devices cannot contain pirated or otherwise illegal apps. Swappa also requires that a device’s ESN numbers match the originals and that the device not be locked by iCloud following a factory reset.

Devices with ESN stickers that have been altered or removed cannot be listed. Unlike its competitors, Swappa takes it a step further and requires that all devices be sold with a functional battery, as well. In the event that such things should still slip through the cracks, Swappa’s support system is there to help — again, fully powered by human beings who can empathize with the consumer’s predicament.

Up Next: Expanding Product Categories with Household Tech

Ben originally launched Swappa as a marketplace for Android phones, but soon expanded the site’s catalog to include other branded products such as Kindle tablets and iPhones. While Swappa is intended to be highly specialized, it continues to accept a wider variety of personal devices to better serve the consumer tech community. Most recently, Swappa has revealed plans to include gaming devices and smart home-related technology in its marketplace.

Given the cyclic lifespan of gaming technology, it makes sense for Swappa to tap into this surprisingly active secondary market. As with smartphones, new gaming devices are released periodically — although at a slower, steadier pace — inciting enthusiastic consumers to anticipate each launch. The high demand for games and consoles even compels some buyers to set up camp outside of stores to obtain new releases as quickly as possible — something practically unseen in any other market segment besides smartphones.

On the other hand, the house-of-tomorrow concept has gained more popularity in recent years with devices like Amazon’s Alexa hitting the mainstream. Many smart home devices are powered remotely using one’s smartphone, making them another appropriate addition to the marketplace.

“We just recently started working with home tech devices like Google Home,” Ben said. “We know there’s going to be a lot of activity with those types of devices in the foreseeable future.”

As with many entrepreneurs and innovators, Ben started Swappa to fulfill an unsatisfied need and improve the existing marketplace. Since 2010, Swappa has provided a safe and reliable marketplace for new and old tech. Offering everything from a gently used iPhone 6S to an affordable yet reliable prepaid Android tablet, Swappa has something for everyone.