Introducing Pyra — A Feature-Rich Mobile Minicomputer Developed With a Focus on Performance, Portability, and Future Innovation

TL; DR: Set to hit the market in 2018, Pyra is positioned to change the face of mobile computing. The handheld minicomputer features a built-in keyboard and multiple ports for USB devices, SD cards, and even MicroHDMI. With a design reminiscent of popular handheld gaming consoles, Pyra combines the mobility of portable gaming with the performance and functionality you’d expect from a laptop. We recently sat down with Michael Mrozek, the “Main Guy” behind Pyra, who told us how the device was developed to give users the convenience, fun, and on-the-go productivity that’s been missing in the mobile computing space.

The popularity of mobile computing has been trending upward for quite some time. Whether used for connecting with friends or getting work done on the go, mobile devices have become a huge part of our personal and professional lives.

In fact, the remote and mobile workforce is forecast to grow to nearly 1.9 billion people by 2022. And many of these workers are already seeking smaller devices that can still handle the computing power necessary to perform their everyday tasks.

The Pandora minicomputer responded to this demand when it arrived on the market in 2008. Powered by Linux, the handheld device featured gaming controls, a keyboard, and two SD card slots, giving users plenty of storage space to house data files. And, a decade later, Pandora’s successor, Pyra, is set to change our approach to mobile computing. 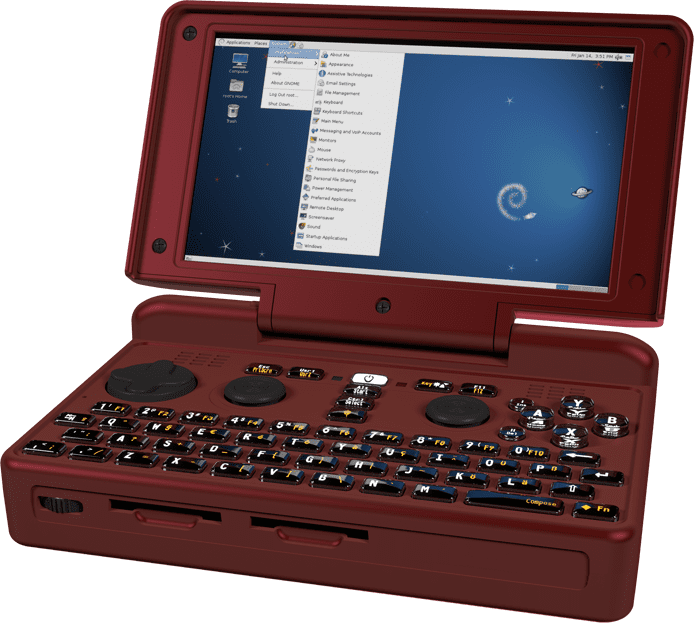 Pyra will hit the market in 2018 and is positioned to answer increasing demand for better mobile computing.

A much more powerful handheld with greater storage and computing capabilities, Pyra takes the mobility of Pandora and adds multiple ports for USB devices, SD cards, and MicroHDMI, much larger storage capabilities, 1.5GHz of CPU, and many more features.

Born as a Spiritual Successor to the Pandora Handheld

Launched in 2008, Pandora was one of the first handhelds of its kind. More than just a computer or game console, it was built with both productivity and fun in mind.

“Pandora was way ahead of its time,” said Michael Mrozek, Founding Member of OpenPandora and the “Main Guy” behind the Pyra project. “When the iPhone came out in 2008, it had basically the same CPU.”

Similar to the Raspberry Pi-based gaming consoles and handheld computers of recent years, both Pandora and Pyra use a custom Linux-based OS for smooth operations and resource allocation. 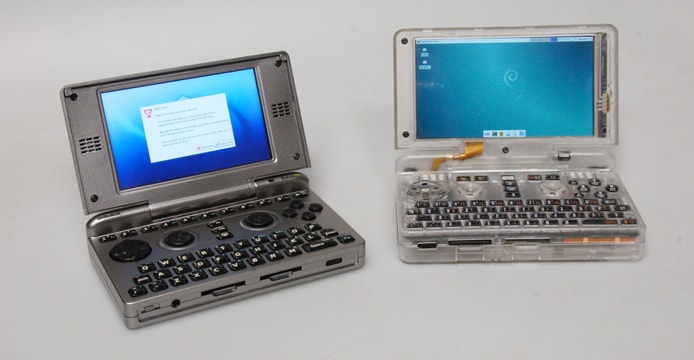 Pyra delivers the same mobility as its predecessor, Pandora, but offers more functionality and power.

“Pandora was optimized for playing games, but a lot of people were using it as a small computer as well,” Michael said.

Several years and sales later, the team had to cease production as Pandora’s hardware components were getting older and harder to manufacture.

Looking to the future, the team began developing the Pyra handheld as Pandora’s spiritual successor. Pyra is powered by the full desktop version of Debian Linux and features enhancements, including more RAM, a faster CPU, and the addition of 32GB of internal storage.

In addition, Pyra can serve as a miniature desktop computer with ports for peripheral devices, including a keyboard, mouse, and monitor. A mobile variant is also in the works and comes with mobile Internet, calling/SMS, GPS, and various environmental sensors.

The Challenge: Overcoming the Barriers to Effective Portable Computing

While Pandora is no longer sold, its legacy lives on with Pyra. Not only did the original technology provide a springboard for new ideas, but the challenges faced during development also prepared the team for Pyra’s upcoming issues.

“With Pandora, we had never produced a device like that before,” Michael said. “With Pyra, we now know most of the challenges, so it should be a smoother ride.”

Although these challenges would be familiar, the new hardware brought its own unique problems as well. For example, Pandora occasionally ran out of RAM. To solve this, Pyra’s 2GB RAM board was upgraded to 4GB; however, the team found that hardware design issues were causing systems crashes.

“Simply because modern hardware is a lot more strict regarding voltage stability and timings, the first board design wasn’t good enough for 4GB and needed a lot of tweaking, including simulation, of the board layout,” Michael said.

Aside from memory issues, building Pyra has been a challenging but rewarding endeavor due to its innovative hardware.

“The products these days are more complex and you need to take a lot more care,” Michael said.

To make Pyra more future-proof, its board features a modular design split into three parts: one for the CPU, RAM, and storage, one for ports, and one for the display. This way, parts can be upgraded instead of having to buy an entirely new device, as was the case with its predecessor.

Other hardware issues arose from the inconsistent quality of parts. For example, the Pyra team switched casing manufacturers from a Chinese company to one based in Europe for easier quality control. Meanwhile, the team had to address overheating CPUs by hiding cooling technology within these compact cases. Despite its roadblocks, the team hopes Pyra’s continued refinements will ensure a higher-quality final release.

A True Computing Experience in the Palm of Your Hand

While Pandora was ahead of its time in 2008, Pyra is in the process of becoming one of the most interesting and innovative handheld computing devices of our time.

“We want to keep everything that was good from the Pandora and improve everything else,” Michael said.

Compared to Pandora’s 800×480 resolution, Pyra’s larger 5-inch screen is 720px and features touchscreen capabilities. As a result, Pyra’s speakers have migrated to the bottom of the console. Pyra also features more gaming controls, including four shoulder buttons and two analog nubs, as well as slots for both SDXC and MicroSDXC to store plenty of games, documents, and other files. 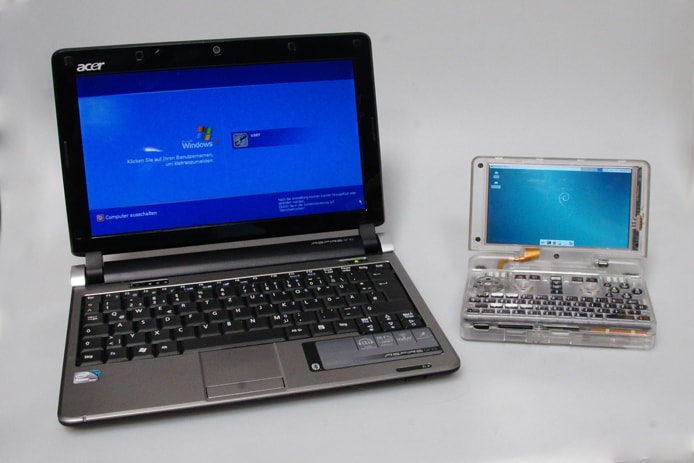 Pyra’s compact size and CPU power are turning the heads of users who need high-performance computing on the go.

Measuring 13.9 by 8.7 by 3.2 centimeters (about 5.5 by 3.5 by 1.3 inches), Pyra is designed to easily fit in pockets, satchels, and purses. Unlike other handhelds, Pyra’s 6000mAh battery is easily replaced and boasts an impressive lifespan and quick charge time.

“I absolutely hate how you have to throw away some devices after 1.5 years because the battery doesn’t work anymore,” Michael said.

Due to Pyra’s unique configuration, its single-charge uptime easily exceeds that of comparable devices. In addition, its backlit keyboard and optional mobile features make Pyra highly versatile — a great companion for nighttime typing or a feature-packed phone that runs on 4G for computing on the go.

Available for preorder, the Pyra boasts an impressive range of features with even more planned before its release. Its modular design makes it easy to upgrade — a rather uncommon feature for laptops and even rarer for tablets, phones, and gaming handhelds. The current default CPU is dual-core and clocks in at 1.5GHz. Housed on its own PCB, it (and RAM and storage) can easily be upgraded when new parts are released. With the final prototype already in users’ hands, the team eagerly awaits being able to market its official launch.

Given that Pyra is the brainchild of tech enthusiasts, it comes as no surprise that the future customization of both its hardware and software is encouraged. Like the Pandora before it, Pyra is set to receive longtime support, both from the team as well as from the open-source community. With its Debian Linux OS, much of Pyra’s software is open-source and continuously updated.

“I’ve been involved in the open-source community for 15 years, and I’ve always been a fan of the achievements small people can do,” Michael said. “For example, I’m impressed by indie games where a team of only two or three members can create a game that is so much fun compared to some of the blockbusters.”

Built for longevity, portability, and fun, the Pyra handheld is a promising project with a lot to offer fans of both gaming and mobile computing who are looking for something a bit different. Unlike phones and tablets, where the primary input method is through a touchscreen keyboard, Pyra allows for input through its touchscreen as well as its built-in keyboard or external USB keyboard. Flexible and powerful enough to be used as a mini-desktop, yet compact enough to be used as an alternative to tablets — or even phones in the case of its mobile edition — Pyra proves that some of the biggest surprises come in the smallest packages.