Concerned About the Scarcity of Female Leadership in Hosting? The 30% Club is on a Mission to Increase Gender Diversity on Boards and C-Suites 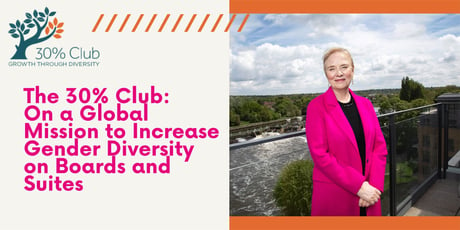 Christine Preusler covers the hosting and technology space through in-depth feature articles and interviews with the biggest names in the industry. With more than a decade of experience managing and publishing print and digital publications, Christine leverages her communications skills to keep readers up to date on the latest web hosting services and innovations. Her goal is simple — to distill complex hosting concepts into clear yet thought-provoking narratives suitable for developers and tech newbies alike.

TL; DR: The 30% Club, founded in 2010, aims to increase the presence of women in boardrooms and C-suites across the globe. The organization works to promote gender diversity through the vehicle of the UK’s biggest companies. With several virtual events planned for the near future, the 30% Club is nurturing a powerful community of changemakers for the good of women everywhere.

The lack of gender diversity in the tech industry is a problem. We do our best at HostingAdvice to illuminate every nook and cranny of the market. But in my personal experience writing about the industry, I’ve only profiled a handful of women-owned hosting businesses.

This pattern rings true across the tech industry. Researchers predict that women hold a mere 26% of computing-related jobs. That percentage plunges further as one ascends the leadership ranks: According to one report, women in tech hold just 16% of senior-level roles and only 10% of executive positions.

It’s easy to see why. A recent TrustRadius survey found that 72% of women in tech say they have worked at a company with pervasive “bro culture.” Furthermore, a 2020 study by Exabeam showed that men in the cybersecurity sector earn an average of $91,000 a year, while women bring in only $62,000.

I take some comfort in the fact that several organizations are working toward equal representation for women in leadership positions. The 30% Club, for example, promotes gender balance on boards and in high-level positions across industries. The group operates under the premise that doing so leads to stronger corporate performance, increased innovation, and better-managed brand reputations.

“The 30% Club is a unique global network made up of leaders of the world’s biggest companies making a commitment to gender diversity,” said Laura Whitcombe, Campaign Coordinator at the 30% Club. “Over the years, we’ve been able to harness this great and powerful community to really affect change.”

The 30% Club was founded in 2010 by Dame Helena Morrissey, an investment manager in the United Kingdom. At the time of launch, female representation across the London Financial Times Stock Exchange 100 Index (known as the FTSE 100) hovered around approximately 12%.

Helena’s vision was to encourage CEOs and chairs of the UK’s biggest companies, many of them in the financial services industry — to commit to bringing at least 30% female representation at the board level.

“Today, some 12 years later, the FTSE 100 is up to about 36% women on boards, and across the FTSE 350, it’s about 35% — so it’s been very successful in its original aim,” Laura said. “During that time, the club has grown to an international campaign made up of 18 chapters.”

“Her vision is that the 30% Club globally represents the interests of all women and seeks to further encourage the world’s biggest companies to commit to beyond 30% female representation at board level and the executive committee level,” Laura told us. “That’s where a lot of the challenges are at the moment.”

In June, the 30% Club Poland joined the club, intending to increase the representation of women at 140 of the largest Polish-listed companies to at least 30% of management and supervisory boards combined by 2030. The percentage of women on the boards of those companies was just 15.15% at the end of 2020.

“I am so pleased Poland has joined the 30% Club,” Ann Cairns stated in a June 9, 2021 press release. “I thank the distinguished founding members and partners for supporting this important initiative that truly has the power to improve corporate culture and make better decisions to the benefit of companies, the economy, and society. Diversity in governance is a business imperative for any company.”

An International Campaign for Equality in Leadership

“Sometimes you’ll hear people say, ‘Well, women aren’t as likely as men to be in roles where they have oversight of P&L; they’re usually running HR departments or marketing, which are not usually represented on executive committees,’” she said. “But why aren’t the heads of those departments represented on executive committees? That’s something to consider.”

Critical to the 30% Club’s efforts is its mentoring program.

“We run a cross-organizational mentoring program for those who’ve been identified as having leadership potential,” Laura said. “A senior leader mentors them outside of their organizations — and that’s a hugely important thing; you need sponsors and champions as a woman or any other minority, unfortunately, if you are ever going to achieve a board seat.”

Since 2020 the program has been expanded as part of Mission INCLUDE to include individuals from all underrepresented groups, though gender disparity continues to be the nonprofit’s primary focus. The social impact group Moving Ahead is delivering these programs in the U.S. and UK with the aim to create a more inclusive society and business landscape.

Laura said the initiative also helps diverse candidates receive board experience through shadow positions that give them entry-level boardroom access. These efforts are just a few ways that the 30% Club is helping usher in a new era of leadership diversity. The group tackles everything from working with Chairs and CEOs and harnessing media support to driving research, creating content, and holding events to expand its message.

“There’s no silver bullet — it really is about a commitment coming down from the top implemented in the most appropriate manner across business areas, and with a clear understanding that diversity should be treated as a strategic business objective,” Laura said.

And it is — McKinsey reports that narrowing the gender pay gap could increase the UK’s gross domestic product by more than $200 billion by 2025.

Improving Opportunities for Women Regardless of Age, Ethnicity, or Background

Moving forward, the 30% Club will continue to focus on improving leadership outcomes for all women, regardless of age, ethnicity, background, or social status.

“As we grow globally, we’ll also expand some of our areas of focus. For instance, in the UK, we’ve established ethnicity targets for the first time. It’s a bit premature to consider global targets, though, because ethnicity doesn’t mean the same thing in 10 different countries.”

The club is also exploring the potential implications of women’s leadership on climate change.

“It’s so important that women’s voices be heard in that space and that their solutions are under consideration,” Laura said. “There’s research pointing to the fact that educating girls is the sixth most influential thing you can do to take action on climate change.”

In February 2022, the 30% Club will host its first global conference, which will bring together all international chapters and members.

“We’ve just convened what we believe to be the world’s biggest meeting of CEOs in history to speak about gender equality,” Laura said. “We held the event with the UN Foundation and were joined by Melinda French Gates to discuss the Generation Equality Forum in Paris. So we’re very pleased our convening power is quite impressive.”

Christine Preusler covers the hosting and technology space through in-depth feature articles and interviews with the biggest names in the industry. With more than a decade of experience managing and publishing print and digital publications, Christine leverages her communications skills to keep readers up to date on the latest web hosting services and innovations. Her goal is simple — to distill complex hosting concepts into clear yet thought-provoking narratives suitable for developers and tech newbies alike.