TL; DR: StartApp partners with 230,000+ apps to help build creative, data-driven advertising that keeps users immersed in the ad without disrupting the app experience. Their “Brains and Beauty” model, coupled with the recent release of their social data platform (SODA), empowers app developers and publishers to understand user intent at scale. StartApp partners can assess the behavior of millions of profiles and leverage that intel to boost conversions — effectively monetizing their site, app, or tool.

These stats illustrate the exploding opportunity that lies in mobile app development, but they also caution app developers away from relying on app download payment for revenue. Unfortunately, even “multilingual” developers who are fluent in Swift, NodeJS, Python, et cetera are often not well-versed in the language of monetization — you know, the conversion conversation, the dialect of display ads, the creative voice that speaks to users and earns you money for your project.

Enter StartApp. In 2010, Gil Dudkiewicz and Ran Avidan saw this flare-up of mobile opportunity and recognized the need for a resource to help app publishers and developers profit from their projects. They founded StartApp with a plan to provide innovative (data-based) mobile ad strategies to help app developers create the most creative and effective monetization roadmaps.

Today, StartApp is present on more than 230,000 apps with over 475 million monthly active users. We sat down with Director of Corporate Marketing Dana Endundo Ferreira to discuss (1) the importance of monetization for developers in particular and (2) how StartApp leverages their offerings to provide the most lucrative monetization options possible.

Let’s say you’re developer. You’ve had an awesome idea, you’ve engineered it to your liking, and your project is picking up traffic. Great! Now, wouldn’t it be better if you were actually making a profit off of your increasingly popular idea? 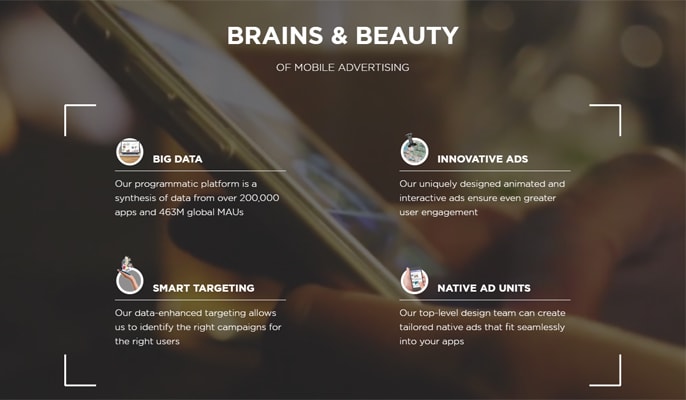 StartApp developed a slogan that embodies their monetization methodology for mobile marketing: the “Brains and Beauty” model. “The combination of both is what we pride ourselves on,” Dana said. “We always try to give you the best type of advertisement: the one that offers minimal disruption to the user experience and maximum engagement.”

StartApp currently partners with over 230,000 applications, working with a database of over 1.4 billion mobile users worldwide, so with that scale of user intel, they’re able to analyze user behavior and offer data to serve as the ‘brains’ behind the advertising. The tremendous wealth of data that StartApp has accumulated over the years enables them to share insights into the users, their habits, and their intent — helping mobile advertisers fine-tune their ad targeting strategies.

Dana described the ‘brains’ as being “all about machine learning, business intelligence, collecting data, and showing the right app to the right user at the right time. This is beneficial to both the developer, the advertiser, and the user; the developer can be certain that only the most relevant users are being targeted, which leads to higher revenue for them, the advertiser can be sure their ads are being shown to only high-value users, and the user gets ads that are relevant to only their specific interests.” If you craft your campaign based on the data science, Dana asserted that “there’s less opportunity for failure or wasted time and money.”

The Beauty: Creative Team Develops Ad Strategies That are Relevant to the Users

If the data is the brains of the operation — the machine and the platform cranking out insights — then the beauty is in creating the ad that is going to effectively appeal to (convert!) the visitor. “It’s all about giving the developer and the user the most appealing and engaging ad units so they will have a positive app experience,” Dana said. She explained that this should not only help increase user satisfaction but also increase revenue for developers — all the while not disrupting the all-important user experience. “For example, while we offer the traditional ad units (banners), other ad units we offer include videos, 3D banners, and 360-degree ads, which use built-in device capabilities to show ads in a full, three-dimensional 360 degrees,” Dana explained. “It’s this extra creative push that helps make the difference.”

NEW SODA: Immerse Visitors in Your Ad without Disrupting their App Experience

StartApp’s latest innovation is their new social data platform: SODA. SODA is a platform that collects an unprecedented, industry-leading amount of social data — billions of social profiles — from a portfolio of its social app partners. SODA then interprets that data, turning it into an insight-driven understanding of global user intent. In other words, SODA allows social partners to contribute a piece of the puzzle (raw data) and get back the whole picture (processed user data).

StartApp’s new SODA platform allows users to “Scale on a Human Level” with insights from billions of user profiles.

“The sheer amount of powerful data that is available today, combined with SODA’s ability to bring large-scale analytical intelligence to that data, allows marketers and publishers of all sizes to find and convert the highest value users,” Dana said. The company calls it “Scale On a Human Level.” The result: the ability for social app developers and publishers to increase organic user growth (social influencers), improve user engagement (real-time personalization), and develop next-gen monetization channels (based on user data and context).

The collaborative platform involves an open framework for developers to create engaging and personalized user experiences to advertise within their apps. With SODA “Bubbles,” a mini version of one app can be viewed within another app, allowing users to complete cross-application actions without leaving the original app (e.g., ordering a cab, listening to Spotify). This keeps users in the application while driving relevant marketing their way.

“It’s all about bringing this immersive experience to the customers,” Dana explained this new product that the team is extremely proud to be releasing to the world. “We wanted to create something that doesn’t disrupt the user experience and at the same time provides publishers and advertisers with additional monetization options that are not ad-driven but rather action-driven, enhanced user engagement tools, and new organic growth opportunities.”

Final Words on StartApp & The Culture Behind the Company

If there’s one thing developers are great at, it’s having an idea and implementing it via a programming language of their choice. The language of monetization, however, is rarely their strong suit. StartApp has grown to be a team of over 150 innovators focused providing data-driven insights to customers to help them target their audience creatively and intelligently.

The company takes an equally dedicated and creative approach to building their workplace culture. They go the extra mile with perks such as company trips, events, and surprising the team with goodies and a catered breakfast in anticipation of an imminent product release. 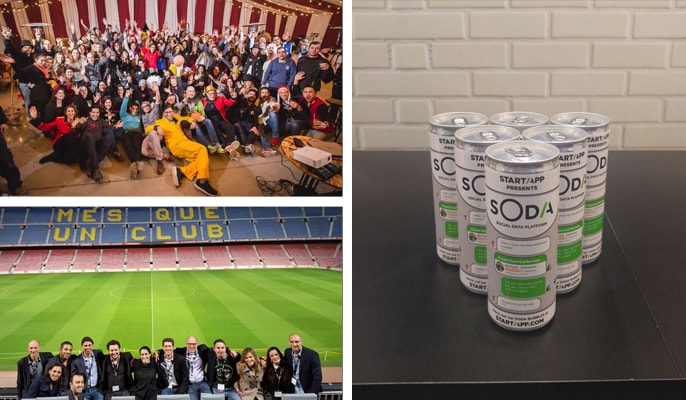 StartApp’s SDK has been downloaded 8B+ times and the company now works directly with the world’s top grossing apps.

The company recently recognized the 5-year anniversary of StartApp by gathering their entire team in Israel for a company-wide celebration — where Dana told us the team had a great time letting loose in the desert. “We work hard and we play hard,” she said, before going on to illustrate the empowering culture of StartApp. “Everybody is very smart, everybody is very dedicated, and everybody really believes in the company,” she said. “The leadership is always open to new ideas, because we always want to be innovating and moving forward.”