TL; DR: If you want to get your SaaS startup off the ground without raising venture funding, look no further than Rob Walling. The serial entrepreneur has channeled his vast experience in building and selling startups into a multifaceted collection of content designed specifically for founders. Whether he’s authoring best-selling books or leading the first startup accelerator built for bootstrappers, Rob aims to help today’s entrepreneurs take their passion projects to the next level.

There’s something admirable about entrepreneurs who pull themselves up by their own bootstraps — and although challenging, it’s not uncommon.

According to the Small Business Administration, founders often dig into their own pockets to fund their endeavors. In fact, personal and family savings accounts constitute the most common source of capital used to finance business growth — outranking profits, assets, loans, and business credit cards. 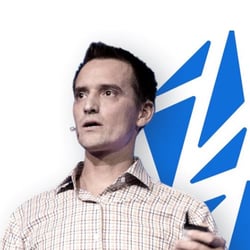 Rob Walling is on a mission to help SaaS entrepreneurs thrive.

It makes sense: The bootstrapping route can certainly pay off, differentiating a startup from its competitors via benefits such as creative freedom, faster progress, and an aversion to reckless spending.

But considering that 23% of startups fail simply because they run out of cash, entrepreneurs must play their cards carefully. Serial entrepreneur Rob Walling, who has built and sold several startups during his career, knows this. And, since 2005, he’s been using his experience to help other self-starters avoid the pitfalls of bootstrapping.

During the past 15 years, Rob has consolidated his skills into a worldly collection of content designed specifically for anyone interested in bootstrapping, startups, and Software-as-a-Service (SaaS). He’s written three books, published countless essays, started a successful podcast series, and launched conferences for the startup community.

“Ultimately, my aim is to help non-venture track founders launch their companies, grow faster, and achieve greater success,” Rob told us. “The books, podcasts, and conferences all help people work toward the same goal.”

Best-Selling Books on How to Launch, Grow, and Maintain Startups

Rob has been blogging since 2005 when he began chronicling his experiences as a solopreneur in software development.

Rob’s posts brought in so many questions from readers that he realized he could expand upon his narrative in book form. At the same time, he identified an apparent hole in the market.

“I was so frustrated because I read every book on startups, every book on starting at a company, and none of them spoke to me,” he said. “They didn’t have boots on the ground, and they weren’t tactical, speaking to one individual.”

In 2010, after polling his readership to gauge interest in the project, Rob holed himself up for three months while he took on the herculean task of writing his first book. The result was “Start Small, Stay Small: A Developer’s Guide to Launching a Startup.”

The book, which serves as a step-by-step guide to getting a tech startup off the ground with no external investments, was well-received.

Since then, Rob has published two additional books. “Start Marketing the Day You Start Coding (and other essays)” is a roundup of his best startup articles from the past decade. He also contributed to “The Entrepreneur’s Guide to Keeping Your Sh*t Together,” written by his wife, Sherry Walling, a licensed clinical psychologist.

Tune in to “Startups for the Rest of Us”: A Podcast for SaaS Success

Rob said he began listening to podcasts around the time “Start Small, Stay Small” was released. While he knew he’d always be a writer, he realized having someone’s voice in his earbuds for 20 minutes a week was a radically different experience than reading someone’s words.

For example, he said he followed “Joel on Software,” a blog authored by Software Engineer Joel Spolsky, for years. “The first time I heard him on a podcast, I felt like I knew him instantly,” Rob said. “So in 2010, I decided to start a podcast, “Startups for The Rest of Us,” to help entrepreneurs launch software products.”

The first 448 episodes featured Rob and co-host Mike Taber, who eventually stepped back to work on Bluetick, a platform for managing follow-up emails. Although the initial audience was 10 times smaller than that of his blog, his viewers were far more invested.

“Right away, we noticed the community engagement was so much deeper than I’ve ever experienced with the blog,” Rob said.

Over the years, the podcast has featured the success stories of numerous entrepreneurs, including Nate Grahek of StickyAlbumns.com, BidSketch Founder Ruben Gamez, and Laura Roeder, Founder and CEO of MeetEdgar.

The episodes include a wide variety of subject matter, such as key performance indicators for SaaS products, how to prioritize feature requests, why you should hire an intern, and calculating lifetime value. A full archive is available to readers at no charge.

Rob said it was only a matter of time before his podcast community wanted more. “Pretty soon, we had a lot of folks who were interested and asking where they could go for more resources.”

Bringing Founders Together with MicroConf: An Event that Inspires

He answered those requests with the launch of MicroConf, a series of events for non-venture track startup founders. Whereas his books serve as how-to manuals, Rob said he founded MicroConf to build a supportive community of entrepreneurs. The first event took place in a small hotel in Las Vegas with about 100 people.

“We started MicroConf in 2011 on a shoestring budget — and almost lost our shirts on it,” he said. “We barely broke even in the end when a big sponsor came through. Since then, we’ve hosted multiple events with hundreds of speakers and thousands of attendees.”

Ultimately, MicroConf’s mission is to help self-funded founders gain a sense of accountability through peer support while sharing knowledge to make more informed decisions as they grow their companies. In 2020, MicroConf will include seven in-person events, several online events, and MicroConf Remote, a one-day event in July.

One of those online events thus far has featured The State of Independent SaaS, a report produced by MicroConf with the support of Stripe and Basecamp. The report, based on a survey of more than 1,500 bootstrapped SaaS companies, revealed insights on industry demographics, growth rates, and benchmarks, among other information.

“SaaS used to be less competitive, just because so few people were involved,” Rob said. “The tools were more difficult to work with, and they were more expensive. Now that’s shifted — it’s easier than ever to launch a SaaS app.”

That said, lowered barriers to access have led to more competition, and Rob said it’s harder for independent SaaS developers to stand out from the crowd.

TinySeed: A Startup Accelerator for Bootstrappers

The program processes 10 to 15 companies at a time as one batch. In addition to funding, TinySeed provides guidance via weekly calls with fellow startups in each batch and remote office hours with specific mentors. The company is currently signing on companies for batch two, which begins in April. Batch three applications will open late 2020.

“We will start the application process for batch three soon, so we’re really in the trenches getting those startups locked in,” Rob said. “We look forward to working with them in a couple of months.”