Parallels Desktop 12: In-Depth Look at How Dev Teams Can Save Testing Time and Money With the Latest Edition of the Virtualization Software

By: Laura Bernheim Updated: March 23, 2017
Follow "The Hosting Blog" daily as hosting experts, programmers, and tech managers go in depth on a variety of tech-related topics.

TL; DR: In a unique position between Microsoft and Apple (and, to a lesser extent, Google and Linux), Parallels solves complex engineering and user-experience problems to bring users the best of all operating system worlds. Product Manager Kurt Schmucker and Vice President of Communications John Uppendahl gave us a personal tour of Parallels Desktop 12, which launched in August 2016. The tools and features included in the Pro subscription make development and testing a breeze with all the configurable virtual machine options you can imagine, the ability to remotely connect to any computer from any device, along with a toolkit for simplifying everyday tasks like taking screenshots.

If you know how to develop, you probably know the importance of testing your program or website. Operating systems and web browsers can interpret your code differently, or even not understand it at all.

Although it’s great your app works like a dream on your new, souped-up laptop, have you thought about the old machine your parents will use to see the project you’ve been working on? Your website probably looks incredible in Chrome, but what happens when someone on the other side of the world looks at your site in — gasp — Internet Explorer?

Instead of investing all your money gathering various configurations of computers and mobile devices, a virtualization program enables your computer to act as if it were multiple computers. These virtual machines, in turn, can be created with different operating systems, browsers, and computing powers.

For more than 10 years, Parallels has helped Mac users access applications, websites, and files on any device or operating system — without rebooting. 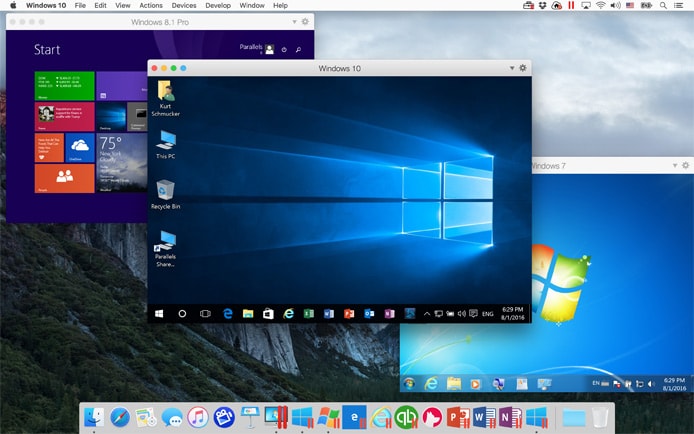 With Parallels Desktop 12, subscribers can run as many virtual machines as their hardware can support.

With palpable passion, Product Manager Kurt Schmucker recently told us how an emphasis on ease of use, speedy performance, and seamless integration in the 2016 release of Parallels Desktop 12 makes development and testing an even more efficient process.

“I can test my application anywhere, learn something, and fix it where there are problems,” he said. “The ability to quickly check all these things early in the development cycle makes my overall application better and gets it done quicker.”

Why Parallels? How Version 12 is Primed for Cross-Platform Performance

Already the top-selling software for running Windows applications on a Mac, Parallels introduced more than 25 performance improvements in Version 12.

Always Ready speed means you can open Windows applications directly on your Mac desktop in fewer than five seconds. The virtual machine starts automatically and stays available in the background when not in use.

“It’s getting hard because we’re reaching the asymptote of what is possible,” Kurt said. “I’d love to make the virtual machines 10 times faster, but that’s not going to happen because the hardware just won’t support that.”

Parallels Desktop is available in three packages. Standard, which is geared for home and family use, sells for a 1-time $79.99. The Pro and Business editions are sold as yearly subscriptions for $99.99 annually.

Try Parallels Desktop for Mac for FREE for 2 Weeks!

We recommend the Pro version for most developers and testers, while the Business package works best for teams because of its centralized administration, license management, and mass provisioning controls.

6 Reasons to Go Pro: As Many VMs as You Want With Custom Setups

Parallels makes it incredibly easy to purchase Windows 10 or migrate Windows from an existing PC. In Pro, you even have the options to install Windows with pre-installed development tools and pre-configured Internet Explorer test environments. 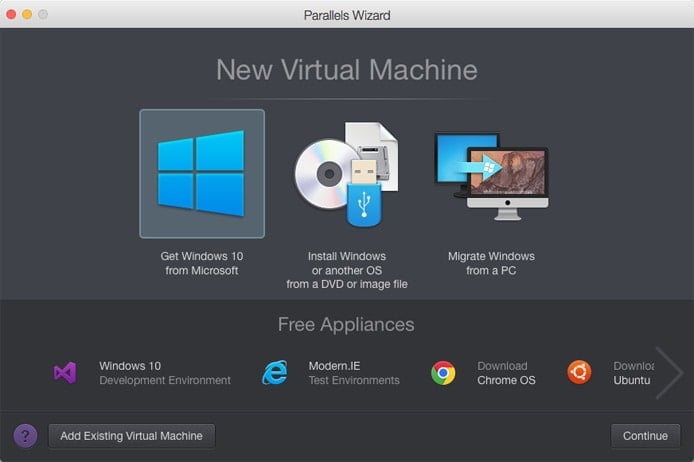 The Pro version of Parallels Desktop 12 comes with pre-configured environments for development and testing.

You can also run as many VMs, in whatever configuration you want, as your Mac can support. Stack your Parallels Desktop with every environment in which you need to test, making them readily available at a moment’s notice.

If those reasons aren’t enough, read on for six more features that make the yearly Pro subscription worthwhile.

Remember the keyboard shortcut for taking a screenshot of a specific window? How about recording audio or setting a timer?

Parallels Toolbox puts 20 of those types of tools right at your fingertips in a dropdown menu right on your desktop. It’s a simple offering, but one that can save teams a surprising amount of time, according to Kurt. Toolbox debuted internally about a month before its release, and the Parallels team quickly made screencasting the most popular feature.

“I’ve been getting videos from all over the company,” Kurt said. “This is the easiest way to document some dynamic thing you want to tell someone about.”

One of the biggest additions in Version 12, Toolbox is also available as part of the Standard package or as a standalone product. Pro and Business subscribers, however, will have immediate access to the three to four tools Parallels will add each quarter — Standard users will have to purchase an upgrade.

Similarly, Parallels Access is a standalone product available in Pro and Business subscriptions. With Access, you can remotely connect your applications, files, and computers from any device. Desktop applications run seamlessly in fullscreen on phones and tablets, and you can navigate your hard drive to find whatever files you need.

Developers who choose to use Apple hardware but develop for Windows platforms will enjoy a new menu item in Visual Studio that enables them to quickly debug their code in several Windows environments with just a click of the mouse.

“I can see a bug I might have in one version of Windows, fix it, and double-check it in two other versions in just a moment,” Kurt said. “I can test my application in XP. I can test it in Windows 8, Windows 7, Windows 10, anything I want. That really reduces my development time and especially my testing time.”

The ability to easily alter disk I/O speed, CPU usage, and bandwidth allows you to allocate your Mac’s resources across multiple VMs whether they’re running simultaneously or you’re measuring your app’s performance on computers of varying strengths.

VMs in Standard packages of Parallels Desktop 12 are limited to four processors and 8GB of RAM. If you have a high-end MacBook Pro and a Pro subscription to Parallels, however, your VM could be humming along with 50GB of RAM. Likewise, you can also test your application with legacy versions of macOS on less-powerful machines.

“We’ve been dying for this feature for a long time,” said Kurt, a longtime Mac developer.

Just as you can adjust a VM’s architecture and computing power, Pro subscribers can easily apply various network connection profiles to limit bandwidth or introduce instability and packet loss.

Further customize your VMs and test your applications in a variety of network connection speeds and levels of instability.

“It’s invaluable for developers to test mobile apps in a variety of weird conditions and know what’s going to happen,” said Kurt, adding that developers applauded him after he presented this feature at a development conference last year.

5. Windows Ink Support Brings Stylus and Touchscreen Use to Macs

Kurt made it a personal challenge to bring Microsoft’s touch-screen and stylus feature, Windows Ink, to Macs through Parallels Desktop.

Support for Windows Ink means Mac users can use their iPad and Apple Pencil to write feedback and draw equations.

In addition to an Apple Pencil, you’ll need an iPad and Mac computer both running the $30 app AstroPad and connected either to the same wireless network or through a USB Lightning cable.

With the setup, you’ll be able to write comments directly on PowerPoint presentations or draw a mathematical equation that Word will convert to text. Kurt used Windows Ink support to comfortably review a 200-page book from his couch.

“I cut the review cycle down dramatically,” he said.

“What we usually try to do is add new features that bring the coolness of the Mac over to Windows,” he said. “In the last two versions of Parallels Desktop, we’ve actually found features in Windows that were cool enough to bring over to the Mac.”

As users and developers themselves, the Parallels team encourages feedback and ideas for new features from users, according to Kurt.

“We’re only limited by the amount of time our developers can put into new tools and make sure the interface doesn’t get complicated,” he said.