By: Sean Garrity Posted: May 30, 2017
Follow "The Hosting Blog" daily as hosting experts, programmers, and tech managers go in depth on a variety of tech-related topics.
Email

TL; DR: Founded in 1998 as an individual mind-mapping solution, MindManager quickly evolved into a comprehensive planning and strategy development tool now employed by SMBs and enterprises around the world. Corel’s Mindjet MindManager software provides a more effective approach to problem solving. The tool works the way humans think, bringing nonlinear ideas and thought processes into focus to give users a global, big-picture visualization of what’s at stake in a given project. For nearly 20 years, MindManager has been helping businesses inspire creativity, boost productivity levels, and bring their ideas to life.

Ekso Bionics is in the business of changing lives. The company is tasked with the seemingly impossible duty of helping people with paralysis, mainly those who have suffered spinal cord injuries or strokes, get back on their feet.

“We create exoskeletons,” said Karl Gudmundsson, Ekso’s VP of Marketing. “With Ekso, people can possibly have a different answer to the question they always ask: ‘Can I walk again?’”

Ekso’s exoskeletons are state-of-the-art biomedical technology. Much of the company’s development process involves collaborating with engineers, doctors, rehabilitation therapists, and patients to map out ideas and processes to build a product that best meets the important goal of re-establishing mobility. To do this, Ekso turned to MindManager mind-mapping software to help visualize and implement their processes.

“Mindjet has been a great tool to help us see and organize information and put it together in a plan to make sure we are bringing something of value to people who are going to use the exoskeleton in their homes,” Karl said. “It’s amazing to witness someone standing up and walking for the first time — maybe 20 years after their injury.”

Michael Deutch, Corel’s VP of MindManager Products, visited Ekso’s production facility and said he was in awe of the great work Ekso was doing. What he saw made him proud MindManager was able to play such an integral role in helping Ekso plan projects and streamline the company’s design and development processes.

“To tour the facility and witness someone be able to walk again using the exoskeleton, you could really see how the product is changing lives,” Michael said. “It makes you feel like you’re doing something good in the world.”

For almost 20 years, MindManager has been helping businesses, like Ekso, visualize and organize ideas that lead to the implementation of more effective and measurable business strategies. Mindjet’s nonlinear approach to problem solving and planning provides a big-picture view of what’s at stake in projects, saving time, effort, and money for the businesses that employ the company’s solution.

MindManager was built to remove the complexity surrounding project development, management, and execution. The tool allows users to create information maps and organizational charts, including Gantt charts, process flows, and timelines, among others.

The flexibility of the software provides businesses a way to step out of the confines of linear thought and move into a free-form process more relatable to how the human brain actually works.

“It’s a tool where people can do their thinking, and, no, it’s not like the Minority Report,” Michael joked. “MindManager allows people to get the thoughts out of their heads and into an interactive application to organize them and see what’s missing.”

Michael told us the tool helps individuals and teams capture ideas and feedback as they happen in real time. The ideas and information can then be visually organized into groups where details can be added.

“It’s not linear — it works the way you think,” Michael said. “For example, if I ask you to name your 10 favorite restaurants in order, almost no one can answer that because you’ll bounce around your different memories and recollections. But, once you get it all down, you can start ordering and prioritizing.”

MindManager’s nonlinear approach helps users more efficiently work through the creative process. Michael used the example of some of the tools we use every day that are based on linear thought processes. Michael noted tools, like Microsoft Word and PowerPoint, are great products; however, the way most people use them sometimes works to hinder progress toward the desired end result.

“Before MindManager, I would spend hours working on a slide for a PowerPoint presentation,” Michael said. “Then, when I’m done with the slide deck, some of the slides I spent hours on would end up on the cutting room floor, never making it into the presentation.” 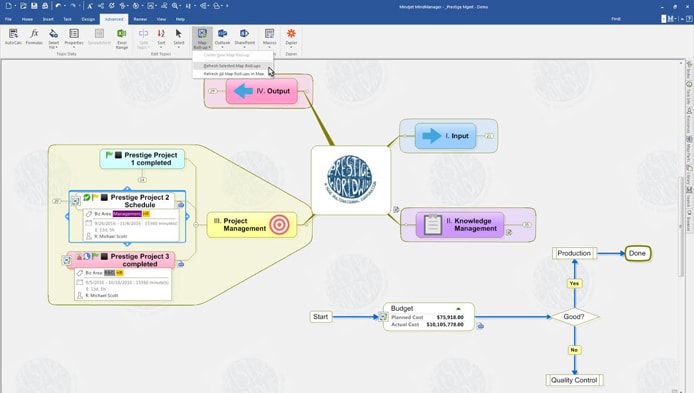 Michael told us this is the result of not being able to see the big picture up front of how the presentation would be organized and flow. By using MindManager as the first step in the process, users gain a complete perspective on the presentation so time is not wasted creating slides using the wrong examples or that don’t jibe with the flow of the story.

“You can think it through up front using MindManager and then go into the details once you’ve trimmed the fat,” Michael said. “This makes it less time-consuming and much easier to achieve the goals you want to accomplish.”

According to Michael, MindManager really shines when organizations employ the tool in the initial phases of project development. Integrating MindManager into some of the tools businesses are already using, as in the PowerPoint example above, helps businesses better understand what they’re attempting to achieve and the best ways to do so. Michael used Microsoft Project as another example of this.

“It’s a great tool for mapping projects and tasks, but it’s not necessarily ideal to use to figure out how to measure success, what needs to happen in each area, and who’s going to participate,” Michael said.

By building these aspects into MindManager beforehand, businesses can export them into Microsoft Projects to give an overview of different project and task management systems.

This kind of upfront planning and mapping can be taken a step further to help an organization determine if a project is even worth implementing. Again, it’s all about gaining a big-picture view.

“The whole world is focused on productivity, but MindManager isn’t necessarily a productivity tool,” Michael said. “It helps you figure out which project you should work on depending on intent. It doesn’t matter how productive you are if you’re working on the wrong project.”

Michael told us this is exactly why so many executive teams around the world are using the tool to see if they’re working on the right projects. MindManager ensures valuable company resources are focused in the correct direction.

With just a few clicks, businesses can drill down into any aspect of a project and measure its ability to succeed. For customers, this can mean up to a 20% boost in project efficiencies, according to Michael.

A Company Culture Dedicated to Bringing Thoughts to Life

It’s easy to see why helping companies, like Ekso Bionics, fosters a sense of pride in the MindManager team. Being a part of someone’s journey back to mobility is uplifting, to say the least.

MindManager does more than just plot out projects. It actually changes the way people think and approach their work. Because of this, Michael has found a warm reception from users wherever he goes.

“When I go to the farmers market, people hug me because I’m wearing a MindManager T-shirt,” he said. “It really creates a cathartic experience for the people who use the tool.”

MindManager lets people visualize their thoughts in a nonlinear way, giving structure to the unstructured.

“When people start playing with MindManager and develop a plan for the first time, it becomes joyful to do your work,” Michael said.