Even though Project Manager Angelique Rajski Parashis has worked with the Power and Energy Society of the Institute of Electrical and Electronics Engineers for five years, she still gets a little starstruck at times.

Among the leaders is University of Minnesota professor Massoud Amin, considered the father of the smart grid. Massoud, who has taught and researched power grid theories for nearly three decades, chairs the IEEE Smart Grid Initiative.

“It’s pretty cool to work with all of these really smart people in all of these areas,” Angelique said. “When you see them in a room talking to each other, it’s kind of mesmerizing.”

IEEE, the world’s largest association of technical professionals, boasts more than 430,000 members and publishes a third of the world’s technical literature in electrical engineering, computer science, and electronics. Of the organization’s 46 societies, 14 signed up to join the first of 20-some IEEE initiatives, created to encompass and capitalize on the wide array of specialties among the societies. IEEE Smart Grid facilitates related publications, educational opportunities, standards, best practices, and conferences.

“We also provide a collaborative space for them to come together and do some brain sharing,” Angelique said. “It really offers everyone a place at the table to talk about smart grids and how they can become bigger and better.”

A smart grid, according to Massoud, can self-heal with real-time monitoring and reactions to constantly predict and adapt to issues. A more modern, reliable grid would shorten and reduce power outages, detect online attacks, and minimize the impact of disturbances.

Each month, Angelique and IEEE Smart Grid coordinate webinars, interviews, newsletters, tutorials, and articles about a particular issue within the smart grid realm.

“We’re really the go-to place for people to visit on any aspect they might be interested in learning about Smart Grid,” she said. “The initiative has experts in the field who provide a really holistic view of what the smart grid is in its different forms.”

The Energy Independence and Security Act in 2007 tasked the National Institute of Standards and Technology (NIST) with developing a framework for the managing and sharing of information to assure interoperability of smart grid devices and systems. The act named IEEE as one of the organizations to develop and contribute standards.

A few years ago, according to Angelique, IEEE Smart Grid revisited the NIST Conceptual Module and enhanced it into what is currently known as the IEEE Smart Grid Domains and Sub-Domains. 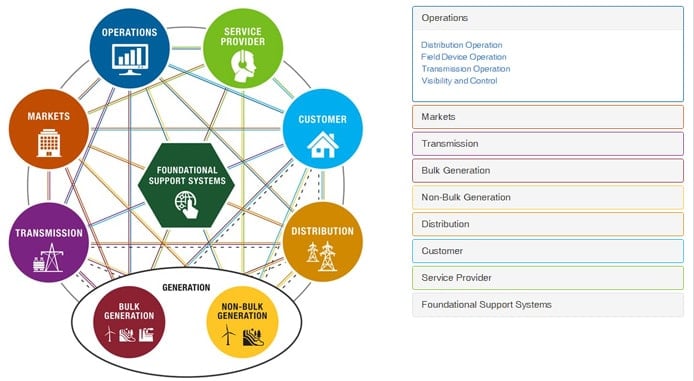 “NIST had a similar framework, but our members enhanced it a little bit and added some more meat to the bones,” she said.

“What’s pretty cool is the people who worked on the original NIST framework also worked on our new framework,” Angelique said. “They went back to NIST, and now they’re improving their structure as we continue to improve ours. It’s cool to see that evolution in the industry of how you define the smart grid.”

The education committee hosts two webinars each month, concentrated on a particular domain or subdomain of the smart grid framework. The webinars, which are free to join, garnered more than 400 attendees on average in 2017 so far.

Interviews, articles, videos, and webinars can be found in IEEE Smart Grid’s resource center. Content is free for members of the 14 participating IEEE organizational units, while other IEEE members and non-members must register and pay a fee.

Modernizing and Optimizing the Power Grid for Smart Cities and Villages

When IEEE Power and Energy Society began administering the IEEE Smart Grid Initiative a few years ago, roughly 43,000 people followed the consortium through four marketing channels. Now, more than 146,000 people engage with IEEE Smart Grid on twice as many channels. According to Angelique, the initiative aims to reach more than 151,000 followers by the end of the year.

“IEEE Smart Village works on the rural education of people in third-world countries where there is no electricity,” Angelique said. “They actually go in there and install systems and teach local people how to be sustainable and prosperous themselves.”

“We’re going to be doing the same things with these initiatives as we’ve done to grow IEEE Smart Grid,” Angelique said. “It’s all for creating the standards, knowledge, and engagement for improving the world.”