How Viavi Has Been Securing and Boosting the Performance of the World’s Major Networks and 100,000+ Datacenters for More Than 30 Years

TL; DR: For more than three decades, Viavi has been contributing to the success of large enterprises and government agencies around the world through its network optimization and optical security solutions. The company understands the integral role IT plays in the modern business environment, which is why Viavi has developed a comprehensive platform that delivers performance monitoring and diagnostics that grant complete visibility into network traffic. The deep insight this provides allows organizations to leverage actionable data to ensure their systems are secure and functioning at the levels necessary to meet their business goals.

Aardman Animations, based in Bristol, UK, is a prominent leader in CGI animation. Responsible for award-winning films and music videos, such as “Chicken Run,” “Wallace and Gromit,” and Peter Gabriel’s “Sledgehammer,” the company employs a team of 250 people working across four different locations.

As an animation company, many of Aardman’s assets are large video and graphics files that are heavy on bandwidth. As a result, the company’s IT team found itself in need of greater infrastructure visibility so that network and application issues could be more quickly solved. That’s when Aardman turned to Viavi for help.

“We have an incredible volume of bandwidth-intensive applications shared across a complex environment and needed a solution that could handle our systems,” said Howard Arnault-Ham, Aardman’s Head of IT. “We reviewed the best network management tools on the market, but no other vendor could touch [Viavi’s] Observer Platform for its combination of breadth of functionality and affordability.”

Viavi’s solutions provided Aardman with a balance of cost-savings and increased efficiency and made the studio’s extended LAN much easier to monitor. Viavi’s Observer Platform includes reporting tools to visualize traffic trends, as well as packet analysis and data encryption. By detecting anomalies in service and traffic early, Aardman can solve issues before they significantly impact performance.

Viavi’s Steve Brown told us how the company is helping businesses secure and boost the performance of their networks.

With performance management solutions from Viavi, companies like Aardman are capable of proactively solving problems and reducing production times.

OSI (Open Systems Interconnection) is a model employing seven interoperable layers that conceptualize how data is received over a network. Analysts are able to isolate problems to a single layer, allowing for easier troubleshooting. This preventive approach saves time and money and improves workflow. Viavi helps companies in industries from entertainment to finance deliver dependable infrastructure and applications to keep operations running smoothly.

IT Has Become Central to Businesses’ Competitiveness & Growth

Because so many companies now rely on technology, such as mobile platforms, web content, and cloud applications, IT departments have become increasingly important to their success. Since Aardman is dependant on 3D animation software and related technologies, the company offers a prime example of this, as its IT department sits at the core of its operations.

Modern businesses, like Aardman, must be able to maintain network security and high availability for their internal and external touchpoints. Steve told us that, because of this, having an effective IT unit is no longer an option — it’s a necessity.

“When businesses first started relying on technology, an IT department was just something nice to have — something extra,” Steve said. “Now, IT can facilitate not just the growth of your company but literally be a linchpin in the company’s competitive niche.”

Viavi’s solutions were built to help IT departments ensure high availability of apps and mission-critical operations. And, according to Steve, Viavi gives enterprises the ability to adapt to evolving technology and the rapid pace of today’s tech-heavy business landscape.

“At the end of the day, when people can’t work, they always turn to IT, and IT needs to be able to supply the answers,” Steve said. “As we’re moving into these very dynamic environments that include clouds, the question always remains the same — ‘How am I going to see what my user is seeing, and how do I solve it?’”

To most effectively address problems, IT divisions need as much visibility as possible. Viavi offers an impressive portfolio of tools that technical departments can use to assess, mitigate, and prevent future issues.

Because IT teams are at the heart of tech-based businesses — but often not directly involved in major decision-making — they are challenged with explaining actionable data in business terms.

“When you have business managers making decisions, it’s important that IT has good communication with these people,” Steve said. “Your IT people also need to have an understanding of what they need in order to guarantee uptime, availability, and successful operation of the site.” 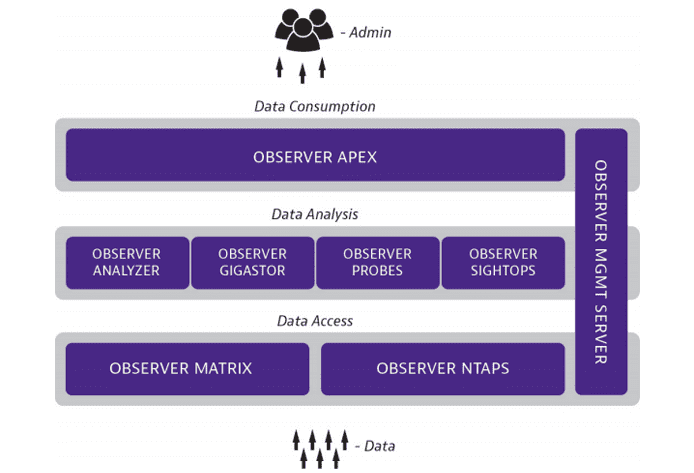 The Observer Platform grants IT higher visibility into networks to maintain performance levels crucial for operations.

Viavi provides products and services that cover the gamut of network planning and observation, testing and measurement, and assurance and location intelligence. One of Viavi’s most popular solutions, the Observer Platform, offers a mixture of features, including:

Analyzing network traffic provides unique insights that other forms of data analysis may not be able to capture.

“You’re able to replicate what went on at that user level and quickly diagnose problems,” Steve said. “With other forms of data, you may only be able to point out what the symptoms are and not necessarily solve the issue.”

Viavi’s products focus more on prevention than remediation. Structural vulnerabilities and bad traffic slow down performance significantly and leave networks open to attack. Some threats take the form of service attacks, rather than file corruption and data loss. In the case of DDoS and similar attacks, harmful traffic is continuously sent to servers in an attempt to overwhelm them. And identifying suspicious traffic is thus key to preventing future attacks.

Analytics Zero In on Incidents to Provide Insight Into Future Prevention

With the emerging popularity of VOIP and conference calls, even companies not traditionally tech-related still face issues with software and equipment. The increasing need for businesses to employ competent IT departments carries the requirements for these experts to be on the cutting edge of threat prevention.

“You know that breaches are going to occur — that’s not really a question,” Steve said. “The real questions revolve around what you’re going to do about it.”

Viavi is a leader in network data analytics, providing an extensive record of data so that analysts can discern a complete picture into network health. Additionally, Viavi consults security professionals, network engineers, and customers when designing and updating its solutions.

“The biggest differentiator between our solutions and everything else on the market is that we design and manufacture everything involved in the capture and analytics of network data,” Steve said. “Really, investigation is about finding those 12 packets that are used in an attack out of millions of data points.”

When it comes to combatting threats, preventive measures go a long way in ensuring stability. Threat mitigation and data recovery are undoubtedly useful, but proactive analysis helps keep threats and technical problems at bay before damage is ever done.

Having technical evidence on hand also helps with investigations into major breaches. Even in the case that no major issues are immediately detected, insights uncovered by Viavi’s solutions can still drive businesses toward greater marketability — uptime is maintained and project turnaround times greatly improve when networks are running at optimal efficiency.

As seen in the case of Aardman Animations, actionable data is a priceless tool in securing company data and improving performance.

“Maximizing the value we provide to customers is about capturing all the evidence, bundling it up into easy-to-understand, real-time monitoring, and then providing an out-of-the-box workload to get to the evidence they want,” Steve said. “It’s about asking where to begin the investigation and how to piece together this information.”