TL; DR: Seeking to challenge traditional vendors with a more affordable enterprise-class relational database, EnterpriseDB integrates performance, security, and management tools into the open-source Postgres platform. The robust database system helps customers create new applications, modernize existing tools, and migrate to the cloud for a fraction of the price. Quick to introduce compatibility with more expensive and cumbersome Oracle databases, EnterpriseDB provides a cost-effective and powerful database solution for more than 3,500 enterprise and government customers, including 88 of the Fortune 500.

With more than 26 billion connected devices expected by 2020, Ericsson needed to re-architect its Content Management System­™. The product, which helps the television and entertainment industry create, deliver, and distribute media across multiple platforms, wasn’t keeping pace with the increased demands.

The company replaced its legacy database system with a solution from EnterpriseDB, which commercially expands and supports the open-source Postgres database.

“The content management demands being placed on our customers are increasing, and the processing power of our previous infrastructure could not keep up,” Ericsson Product Manager Vladimir Jakobac said in a case study. “EnterpriseDB and Postgres provided us with the performance and data management capabilities we needed to provide unparalleled results for our customers — all at an incredibly lower cost.”

“The goal was always to see how we can use the Postgres database to provide a more cost-effective and more innovative open-source-based solution for enterprises,” he said. “We take something that’s a very good open-source database and add the spit and polish in the necessary infrastructure to make it usable in the enterprise.”

According to Marc, EnterpriseDB leadership includes a strong mix of people with experience in both the business and community sides of the open-source world:

The 13-year-old company maintains offices in 16 countries, including a lab in India that focuses solely on boosting Postgres performance and scalability to meet customer needs.

“We’re deeply rooted in the open-source side of the business, but then we also work very closely with companies to make sure they understand what Postgres can really bring to the table,” Marc said. “In return, we get a lot of guidance from them to make sure that we, as the commercialization company for Postgres, really lead with the ability to execute with completeness.”

Parallel Queries and Other Tools EnterpriseDB Adds to Databases

Although Postgres is already “a very large workhorse,” as Marc called the database, EnterpriseDB invests heavily in making it better by creating tools that enable enterprises to deploy the data platform in business-critical infrastructures. 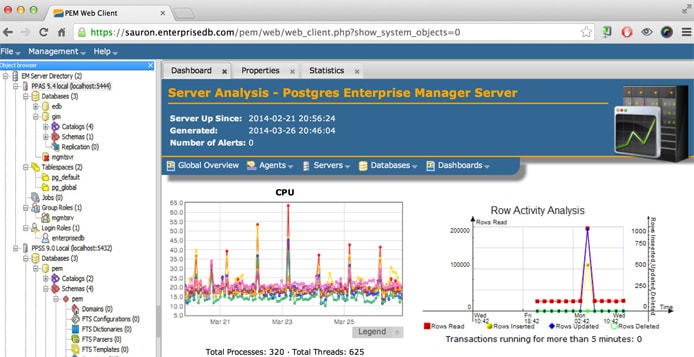 “That’s work we’ve been leading in the community for the past two years, and it’s a game changer for Postgres,” Marc said. “There are workflows that we can now tackle that before were outside of the reach of what you could do with an open-source transactional database system.”

According to the company, customers spend, on average, 42% less on operations and see a return on investment of more than 160% after three years. EnterpriseDB subscription levels have grown for 27 consecutive quarters.

Naturally, the bottom line is among the first factors most enterprises consider and one of the primary forces behind the decision to switch to a commercialized open-source product.

“It’s a very attractive step, and a lot of customers work with us because they want to take that step,” Marc said.

The “really exciting step,” according to Marc, is the much more liberal and affordable licensing policies found with products based on open-source technologies; EnterpriseDB customers can deploy the Postgres database platform on any hosting configuration or cloud service.

“If you look at the licenses for commercial databases, they’re very restrictive,” he said. “You’re restricted in your ability to react to business requirements.”

Between the money saved and the added features included natively in Postgres, EnterpriseDB customers can start tackling multi-model databases and applications that support multiple resources in a single backend system.

“There’s a tremendous amount of innovation that you get by coming to an open-source database like Postgres,” Marc said. For example, mobile-aware and geo-aware functionality are included in Postgres. “You can do that with other databases, but the costs are astronomical. Every single feature you use will cost you more money. It’s all built into Postgres.”

The traditional world of databases calls for housing and analyzing many terabytes of data. Recently, the DevOps movement has introduced requirements for more agility, Marc said.

“They’re looking now at taking these big innovations and chopping them up into multiple smaller things,” he said, speaking of the company’s push for microservices and containers.

“It’s like replacing a mammoth with 1,000 rabbits,” he said. “It might not be exactly as ponderous and stable and never forgets, but it can move much, much faster.”

Marc also likened the microservices-inspired push for business agility products to a Database-as-a-Service that enables developers to create databases in minutes instead of weeks.

“Not only are we making the database faster and more scalable, we’re working on making it much more deployable and pliable,” he said. “In addition to just handling data faster, we can handle new business challenges much more quickly.”