DAOstack: An End-to-End Platform Leveraging Ethereum for the Governance of Decentralized Autonomous Organizations

TL; DR: DAOstack, a blockchain-based operating system for collective intelligence, facilitates the decentralized governance of self-organized networks. The technology makes collaboration accessible through cryptoeconomic incentives and enables effective decision-making through Holographic Consensus. Powered by Ethereum, DAOstack has the potential to accelerate our capacity for problem-solving, empowering individuals, organizations, and communities to self-organize around shared goals.

At its core, the internet is one of the most empowering technologies available. An information superhighway, it affords users around the globe many freedoms — such as the ability to blow the lid off corruption, exposing the all-to-frequent abuse of power within organizations.

Under the glare of the internet spotlight, organizational misconduct may seem more widespread than ever. That’s an illusion: Corruption’s stronghold on government regimes has been evident throughout history and the world, dating back to the first Egyptian Dynasty. Now, it continues to be pervasive throughout our global economy.

“We’re witnessing corruption that already existed in many state actors and legal institutions in a way we haven’t been able to observe quite as directly before,” said Pat Rawson, Communications Director at DAOstack. “It’s critical that we start to articulate better systems for ourselves. It’s the right narrative to start having at this time.” 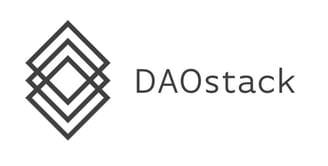 DAOstack has the potential to profoundly change the way we collaborate.

DAOstack, an operating system for collective intelligence, could be the answer to toppling our current paradigm in favor of decentralized autonomous organizations (DAOs). Pat argues that decentralized governance could provide a framework for evolving the complexity of our current organizations and institutions on a global scale.

“There is an explicit need for this demonstrated by the failures of the nation-state, corporation, and other governance forms: One clear example is the current failure to address issues such as climate change,” Pat said. “Our current organizational design as a species is frankly unequipped to tackle these sorts of challenges, so we must experiment with new governance forms.”

As a blockchain-based operating system powered by Ethereum, DAOstack has the potential to facilitate decentralized governance, frictionless collaboration, and effective decision-making through self-organized communities and collective intelligence.

Pat told us DAOstack is an ongoing passion project started by Matan Field and his circle of decentralized governance researchers, developers, and advocates in late 2017. Matan had worked with Oren Sokolowsky, now Chief Engineer at DAOstack, and Primavera de Filippi, an expert on decentralized governance and author of “Blockchain and the Law,” for about three years prior to that.

Vitalik Buterin was an advisor on the Backfeed protocol, a precursor to DAOstack. “DAOstack is a continuation of an ongoing effort to create a comprehensive platform for decentralized governance rather than a launch in itself,” Pat said.

As such, DAOstack is growing in the midst of an ever-shifting technological landscape. Pat said Ethereum’s continually evolving narrative has significant impacts on the technology.

“Ethereum uniquely and persistently redefines itself, which I see as being one of its greatest advantages as a smart contract platform,” he said. “Ethereum has changed a large part the conversation around blockchain, as well as the general makeup of its participants: Bitcoin lent itself to an anarcho-libertarian ‘cypherpunk’ discourse that seems to be fizzling out or losing energy in some respects, which I would attribute to the rise of radical Bitcoin ‘maximalism/tribalism.’”

“We’ve approached a point where its many SDKs and development libraries make it the de facto focal point for the development of decentralized finance applications,” he said. “From a technical perspective, it is hard to imagine divorcing the future of blockchain from the future of Ethereum. The two are approaching a synonymous nature.”

Considering the unconventional nature of the project, Pat said the DAOstack team is challenged on a daily basis to ease the transition between centralized organizations and a decentralized future.

DAOstack won’t settle for ideas to “resolve this tension gracefully” if they fail to meet the project’s high standards. For example, some blockchain organizations use elected associations to decentralize themselves. “While this approach may be easy or convenient, our belief is that associations fall markedly short of the decentralized structures this collective space should aim to architect,” Pat said.

The DAOstack team envisions a future driven by decentralized organizations.

DAOstack’s major differentiator, according to Pat, is its Holographic Consensus framework. The protocol, developed by Matan, is comparable to holographic images. If you’ve ever cut a hologram in half, you know you can see the entire scene in each piece. That’s because the whole is reproducible through segments of its parts.

“Holographic Consensus allows for large-scale governance where there is alignment between the actions of small groups and the will of the greater majority — that is, 51% of the decision-making members of a governance body,” Pat said. “This protocol allows for rapid scaling while maintaining efficient decision-making.”

This is possible through what Pat describes as a “cryptoeconomic game” in which a relatively small network of predictors anticipates the fate of proposals in different DAOs. This allows local groups to make quick decisions for the DAO as a whole. Predictors use a form of currency called tokens to back up their predictions, which provides motivation to ensure they are in line with the DAO’s majority opinion.

“If they’re wrong, they’re actually losing some of their stake on the decision,” Pat said. “Putting skin in the game around decision-making dramatically improves the expected outcomes that the market component is anticipating.”

DAOstack’s economic model is segmented into two currencies: token ownership and voting power. The monetary element used within DAOstack’s economic model for token ownership is known as GEN, while voting power is measured in “reputation.” The two currencies are separated to prevent corruption and facilitate a collaborative economy.

Alchemy, the first application built using DAOstack, is a platform that allows users to create DAOs. Researchers deployed the first DAO running on Alchemy — the Genesis DAO — in a private alpha last spring. The Genesis DAO, focused on furthering the interests of the DAOstack ecosystem, is centered on community-driven development.

“We have the advantage of having an active and engaged community — that is, the Genesis DAO — who has not only steered the direction of Alchemy’s development through suggestion and feedback but have also built out their own features directly,” Pat said. “If somebody has an idea, and it’s a good idea, they can propose it today on Alchemy to the Genesis DAO and be funded for its implementation.”

Pat told us the system represents a profound shift from traditional grants as well as typical blockchain processes, which involve multiple rounds of approval subject to individual preferences. As a concrete example, he pointed to the auction-based fund distribution system used by the U.S. after Hurricane Irma slammed Puerto Rico.

“A few privileged contractors bid low, promise execution, and then cut corners to pocket the difference in spending,” he said. “Our argument is that if we inverse this relationship by engineering a capital distribution system — both scalable and resilient as the Holographic Consensus protocol is — whereupon the Puerto Ricans collaboratively decide how disaster funds are allocated, we would witness less corruption and more efficiency in the allocation of funds.”

The ultimate goal for DAOstack, according to researchers, is to empower communities to tackle issues in a more holistic way so they can find solutions to problems they couldn’t solve otherwise. Pat told us that if the goal succeeds, these self-organized communities could in a sense be described as organisms, rather than organizations.

“We’re going to see some of the first networks that are totally transparent in their financial affairs — collectively managed and politically resistant,” he said. “I imagine we’ll see many case studies in the future evaluating the impact of DAOs on all sectors — business, law, healthcare, education, etc.”

As the technology evolves, its vast and mind-blowing implications on our lives will become clearer. Until then, Pat said the Isreal-based team behind the innovative operating system for collective intelligence derives much of its inspiration from a peculiar source: a local hummus shack.

“It’s really embarrassing how often that place is frequented by our team — team members are not quite ‘official’ until they have visited it,” he said. “It is my belief that the nutritious qualities and delicious texture of the hummus give us an edge over the competitive landscape.”