By: Jennifer Young Posted: May 8, 2018
Follow "The Hosting Blog" daily as hosting experts, programmers, and tech managers go in depth on a variety of tech-related topics.
Email

TL; DR: Nearly all servers experience some sluggishness because of inefficient I/O operations. Condusiv’s suite of software, however, resolves the problems by removing the unnecessary operations that are slowing down the system. As part of a recent release of three new software programs, the company unveiled a unified dashboard that shows customers just how much time the software saves them by streamlining application workloads. Brian Morin, SVP for Global Sales and Marketing, explained how the dashboard communicates the value of the software and how the new programs make the company more appealing to bigger clients.

Even the most impressive servers can have less-than-ideal performance when under pressure. When the University of Illinois Facilities and Services saw I/O-intensive MS-SQL and Oracle applications lagging because the databases and number of users had grown so large, they knew that something had to give.

“It wasn’t necessarily ‘death by a thousand cuts’ because our all-flash array didn’t die from it, but it was more like ‘drag by a thousand cuts,’” Greg Landes, Manager of Systems Services said in a case study. “When you have a dump truck but are only filling it a shovelful at a time before sending it on, you’re not getting near the payload you should get with each trip.”

Even though the University of Illinois had a “really fast dump truck,” the inherent inefficiencies of Windows Server’s read/write processes meant the servers were getting stuck in the mud. Instead of buying new storage or servers, Condusiv’s software addresses the core issue, said Brian Morin, SVP for Global Sales. His company creates software that reduces the I/O issues dampening performance.

“Anytime any organization runs into a performance problem, they think that the only solution is just to buy new servers or new storage,” Brian said. “It’s a very expensive way to solve performance problems when, in fact, all someone has to do is just install our software. The moment that our software is installed, we reduce the amount of I/O that’s being processed.”

Once the University of Illinois installed the V-locity software, it discovered many small reads and writes running in the background that were slowing down performance. The software boosted performance by 50% to 100% on many workloads.

“Whenever somebody installs our software, the net takeaway is that we guarantee to solve performance problems,” Brian said. “Generally, most performance problems are I/O related. There’s just more I/O that’s being processed than the backend storage architecture can properly handle. We’re reducing the amount of I/O that goes down to storage in the first place.”

As it continues to close the I/O performance gap, Condusiv announced new editions of its three signature programs: V-locity, Diskeeper, and SSDkeeper. General availability is slated for April 2018, and the updated programs feature enhanced reporting functionality and the ability to install and update the software without rebooting.

“What we’re actually doing here in this release is we’re giving someone the concrete evidence of what is the extent of those inefficiencies on any given system,” Brian said. 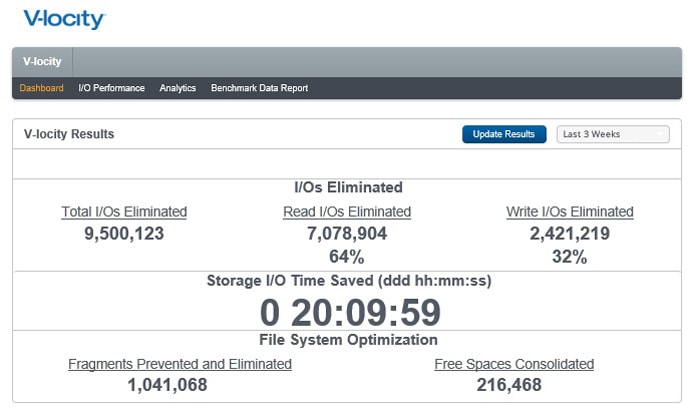 The new dashboard from Condusiv provides a unified look at how server performance improves.

Condusiv surveyed IT professionals to gauge how much the perceived I/O inefficiencies in the Windows OS impact their servers’ performance. Although most respondents seemed to agree on about 15% delays, Brian said answers ranged as high as 50%.

Realistically, 30-40% of I/O traffic from Windows servers are completely unnecessary, according to Brian. The responses proved the differing perspectives on the magnitude of I/O inefficiencies, and the new dashboard included in the new software release shows customers exactly what these inefficiencies were costing them.

“For the first time, someone can install the software — you have a 30-day trial of the software before a commitment — just to find out the extent of inefficiencies on the systems,” Brian said. “The software is fully transparent of how much value it is delivering.”

No More Reboots for Installs and Upgrades

One of the stumbling blocks with previous versions of the software suite was the required reboot to install or upgrade — a major problem for enterprises managing large numbers of servers. However, the latest version of Condusiv’s software removes that burden, which is a major accomplishment.

“As far as we know, we’re the first software vendor at the storage driver layer that’s come up with a solution to install and upgrade our software without requiring a reboot,” Brian said. “We had a real obstacle in doing site-wide deployments in very large customer environments. Anytime they have to patch the software, they’re trying to reboot Windows for hundreds or thousands of servers.”

“The largest enterprises can now take our software and install it completely non-disruptively,” Brian said. “The software is truly set it and forget it. It’s all operating in the background, and the only time that you ever have to touch it is simply when you want to pull up the UI and take a look at the benefits dashboard to see what the software is actually doing for you.”

The Impact of Improved Performance and Transparency

So far, customers have responded positively to the benefits dashboard and the exposure of just how well Condusiv’s software resolves their performance issues. The numbers make a good argument for ROI when it comes time to justify the cost to upper management, Brian said.

“They knew the software was working for them because they saw their performance problems go away,” Brian said. “But they didn’t realize some of the more granular benefits, like how much I/O capacity has been handed back to their all-flash or hybrid subsystems and how much I/O time has been saved as a result.”

In addition to the day-by-day and hour-by-hour performance metrics, the Condusiv dashboard allows users to look back in time to compare the benefit as their environment and configurations change.

“The customer buys the software once, and it solves their performance problems,” Brian said. “Three years later, though, their environment has changed. They’re now using different servers, different storage, and they begin to wonder, ‘Well, what have you done for me lately?’ This new dashboard helps them see the full transparency of what the software is actually doing for them.”

With the thousands of applications that run on Windows servers, customers commonly see improved performance in many corners of their datacenters. Particularly, though, Brian said the company gets numerous requests for SQL server performance issues.