By: Laura Bernheim Posted: May 31, 2019
Follow "The Hosting Blog" daily as hosting experts, programmers, and tech managers go in depth on a variety of tech-related topics.
Email

TL; DR: By combining the best of blockchain technology with business incubation, Adel brings a community-based approach to discovering, evaluating, and building forward-thinking companies. Cryptocurrency replaces the more traditional venture capital funding, enabling organizations to methodically scale without losing the energy of a disconnected ownership group. In addition to discussing the ethical and legal frameworks behind Adel-backed initiatives, Co-Founder Gabriel Dusil gave us a sneak peek into the platform’s best-known projects.

Instead of the disconnected or combative ownership struggle between entrepreneurs and venture capitalists, in which each chess opponent tries to subtly outmaneuver the other, Co-Founder Gabriel Dusil and Adel put everyone on the same team.

“Rather than going the traditional brick-and-mortar route of venture capitalism, where you have different agendas of achieving equity investment versus some local ownership, we felt that if we could do this in a community-based model, then we’re all on the same side of the chess match,” he said. “There’s a common goal to create ideas and move those into the project stage and then move those into business execution.”

Adel was among the first organizations to pursue a collaborative approach to getting innovative ideas off the ground, though Gabriel said the market has since seen an influx of 20 or so similar platforms. What continues to set Adel apart, though, is its focus on cryptocurrency communities and the grassroots, democratic energy associated with blockchain technology.

“We believe there are community players who have ideas, but they don’t have the resources to develop it,” Gabriel said. “They’re entrepreneurs, and they don’t have a marketing person or finance person. They struggle to collect this expertise to build their ideas into business plans. We’re quite unique in our blockchain approach, and we believe we’ve architected quite a good workflow for it to be successful.”

Excited to concentrate fully on building a vibrant and sustainable community, Gabriel and the Adel team only recently finished building out the various components to its platform.

“All of the modules are quite structured in a way to go from mapping an idea to execution and using the community’s expertise to build this baby into something more mature and fundable,” Gabriel said. 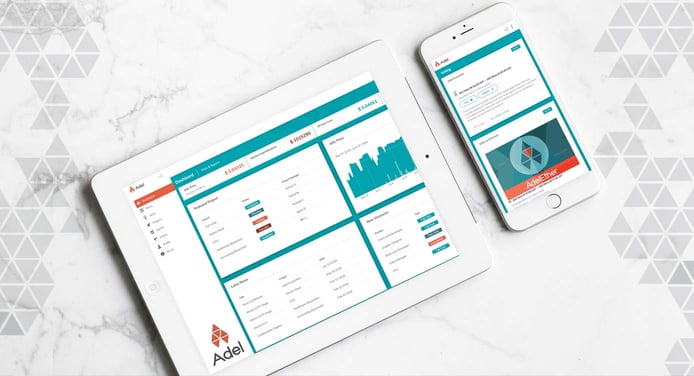 Adel raised money to build the platform and endured a volatile cryptocurrency workforce of remote workers before it was ready to launch. The team’s final module, which deals with funding approved projects, represents the final stage of what Gabriel calls I2P2E2: Idea Incubation, Project Planning, and Enterprise Execution.

Each phase of Adel’s incubation pipeline methodically ensures businesses are set up to succeed with a wide support system and a well-reasoned and researched business plan.

“Launching this final of six or so modules into an ecosystem in which anyone can join and incubate ideas was exciting for us,” Gabriel said. “It really allows us to start to focus on building the community, starting to incubate ideas, and move them through the stages we’ve set out in the platform.”

3 Ways to Get Involved and Participate in the Community

Adel’s community-based approach to incubating advancements in technology thrives behind an engaged and informed user base. Members of the blockchain agnostic platform can vote on projects and become profit participants when the businesses are launched. In the meantime, there are opportunities for mentoring, learning, and employment.

Anyone can register to join Adel; entry-level membership as a Supporter is free and enables people to see basic information about all the projects in the incubator. When we spoke to Gabriel, there were about 60 ideas on the platform.

To publish an idea — and still protect the intellectual property behind it — one must become an Innovator, which gives users access to only the ideas and projects they’ve submitted. Founders, a more exclusive role, have complete access to all ideas and projects. Becoming a Founder requires a user to acquire 32,000 Adel coins through various exchanges and pass KYC approvals, or Know Your Customer identity verification.

“We were actually the first KYC ICO in the world back in 2017, and it was a needed foundation for us to facilitate this platform,” Gabriel said. “The nature of incubation and potential funding requires a legal framework and transparency.”

Adel members can join and participate in the incubator community for free.

Founders can see all the details of an idea and participate in the incubation. As the momentum grows, the idea moves into the project phase of I2P2E2.

“Essentially what happens is the document that is created in the idea stage ultimately becomes an executive summary of the business plan,” Gabriel said. “The business plan, which is developed in the project phase, is a bit more traditional and much more detailed with cash flow, market analysis, and forecasts.”

Through Adel, Gabriel said he is following a personal mission to incubate projects that will positively change the world.

“I need to be involved in projects that are ethical, moral, and legal,” he said. “That’s what I’ve done my whole life. We need to make sure we’re protecting the Adel brand, the participants in the platform, and we also feel a responsibility to protect the blockchain and crypto brands themselves to legitimize cryptocurrency as a viable solution for the mainstream.”

Gabriel is quick to admit that the cryptocurrency marketplace can be rather volatile and full of corruption, fraud, and manipulation — but he also believes that, as the market matures out of its current “embryonic phase,” legitimate projects like Adel will survive while the more nefarious initiatives collapse.

“If we do something wrong and the platform gets shut down, then everybody loses,” he said. “There’s no benefit whatsoever to do something outside of our strategy.”

Co-Founder Gabriel Dusil aims to protect the integrity of the Adel brand and larger blockchain paradigm.

Borrowing from a speech he heard at some point, Gabriel compared cryptocurrency’s place within the internet to a larger reflection of society. While the internet largely represents a humanitarian platform, of sorts, with the ability to connect people and amplify ideas, the anonymity and lack of accountability in cryptocurrency give the marketplace a darker connotation.

“You have bad parts of society and good parts of society all participating in this internet platform,” he said. “There’s this dystopian versus utopian approach to society, the internet, and cryptocurrency. We’re not going to have a utopian future because of crypto, and we haven’t had a dystopian future because of the internet. It’s going to be a shared platform between the two, and we’re just going to have to find out which part of that virtual world we want to live in.”

To kickstart the incubation platform, Adel contributed a project that showcases blockchain as a way to share files. AdelPoint is a decentralized ecosystem that relies on Ethereum and a peer-to-peer distributed file system to deliver files securely for free. If the platform gains user adoption, then contributors running a node on their computer will receive rewards for participating.

“It’s just a quick and basic application we put together for free for the community to be able to upload a file, send it to someone, and within three days, it’s gone,” Gabriel said. “We wanted to see if that could be somehow popularized, and we will develop it further if it gains traction.”

Another project, EPic, is a social network where users can gain tokens by posting images that others like. Both professional photographers and casual users can benefit from the platform, which minimizes complex copyright issues. Combining Steemit with Instagram, EPic rewards featured content while allowing pictures to be used by anyone, either freely or for commercial purposes.

Perhaps the most established product on Adel, Siesta Cloud provides a one-stop shop for the travel industry that enables smaller businesses to compete with more established, global organizations.